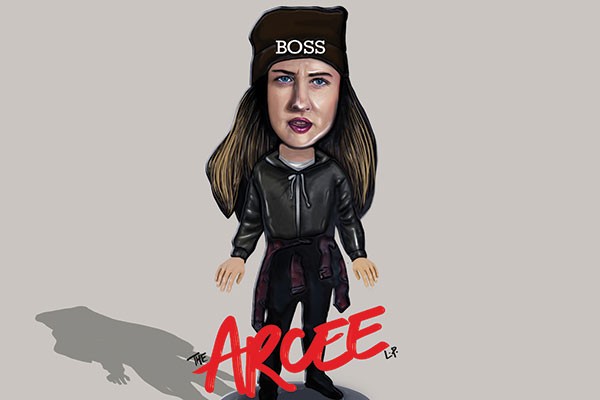 Rona Wignall, aka Arcee, is a hip hop artist hailing from Dunedin. While studying a Bachelor of Music, Arcee also uses her talents on the mic as a rapper. Arcee is set to release her highly anticipated self-titled debut album this Friday,

Lyrics so often come second to beats and adlibs with hip hop these days. Arcee is definitely not following this degradation of the craft. Her lyrics are the focal point of her tracks and tell vivid stories with ease. The latest single of the album, “Rebound”, is a prime example of her ability. The song expresses the limbo of a post-breakup period. Arcee portrays the emotions of a rebound and how you don’t want hurt the person but inevitably will. “The songs on The Arcee LP are all about introducing Arcee and my life, hence the self-titled album,” she says.

Arcee can go from a huge party track like “Go Hard” one minute and slow it right down with the likes of “Nightmares” the next. She’s not a one-trick pony and neither is the producer, Daz. As Arcee herself put it: “He’s a low-key genius when it comes to producing.” His electronic beats perfectly accompany a 12 pack of Codys on a Thursday, while the laid-back tunes are more suited to Coronas and the beach.

The attitude Arcee brings to The Arcee LP is raw. “I’ve always said, don’t shut down an idea unless you have a better one, I’m saying New Zealand needs a female MC that’s world class.” Arcee is definitely happy carrying the torch for female MCs in the country, but I also get the feeling she may give others the courage to try. Her boldness is astounding and in a genre dominated by males, Arcee holds her own.

The Arcee LP is set to be released this Friday and she’s also throwing a huge release party to celebrate. “The release is an introduction, from Arcee to New Zealand. Let me say hello by throwing the biggest hip hop party in Dunedin this year.”

On the whole, I am a huge fan of the album. Her story-telling ability and versatility are second to none. This release is one of many to come, and I Iook forward to watching her progress as an artist. If you are into hip hop, or a good time in general, I highly recommend a listen.