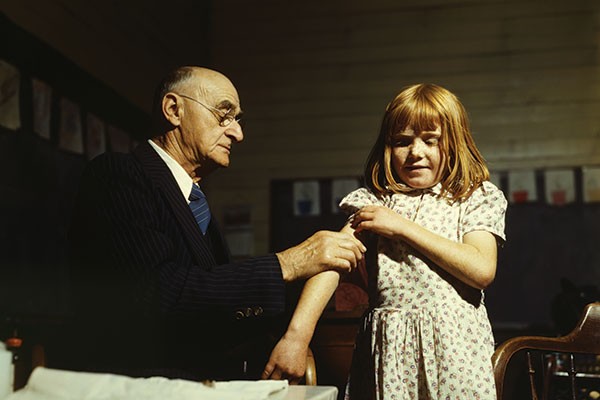 On Immunity: An Inoculation

On Immunity: An Inoculation, by Eula Biss, is the author’s personal meditation on  vaccinations and the web of subjects she connects to them, including disease, safety, motherhood and social responsibility. Biss looks at the metaphors and legends of immunity, the social ramifications of humanity’s innate fear of contamination, and the distrust communities all over the world have towards their own governments. She makes more than one literary analysis of Bram Stoker’s novel, Dracula. She examines the language of vaccination alongside concise presentations of the medical facts, and ultimately produces a philosophical conclusion about the interconnected state of humanity.

On Immunity is a fascinating book. Biss provides the reader with a huge selection of thought-provoking ideas. She switches from one subject to another with remarkable speed, which can be jarring, but she has given herself the task of taking a seemingly small subject and touching upon almost everything connected to it, from Greek myth to class snobbery. The resulting number of clearly expressed ideas, in what is quite a short book, is astonishing, as are the book’s exhaustive  facts. The CIA, for example, used a fake vaccination campaign as part of its pursuit of Osama bin Laden, which resulted in actual vaccinators being murdered by the Taliban. The term “conscientious objector” began with people who objected to vaccinating their children, and only decades later was used for people who did not want to go to war. The etymology of vaccination comes from the Latin vacca, which means cow. Around 1898, “when smallpox arrived in Middlesboro, Kentucky, everyone in the black section of town who resisted vaccination was vaccinated at gunpoint”.

Although Biss occasionally comes off as overly sympathetic to the anti-vaccination crowd, she does make valid points about their position. In making her case, Biss outlines examples of twentieth-century psychologists who liked to blame mothers for causing various illnesses. Schizophrenia was blamed on over-bearing mothers. Homosexuality was still considered a mental illness, and was also blamed on anxious mothers coddling their children. And autism was blamed on “refrigerator” mothers, who were cold and heartless. Biss says “Those who went on to use Wakefield’s inconclusive work to support the notion that vaccines cause autism are not guilty of ignorance or science denial so much as they are guilty of using weak science as it has always been used — to lend false credibility to an idea that we want to believe for other reasons.” It is easy to see the temptation of an external cause for a mother who has been told that the reason her child is different from other children is because she didn’t love her child correctly.

This does lead to a gap in Biss’s wide range of topics. At one point she says, “Diversity is essential to the health of any ecosystem. But the language we use around racial diversity, particularly the word tolerance, tends to imply that other people are essentially a nuisance, and disguises the fact that we need and depend on each other.” But despite this pro-diversity statement, Biss never gets around to articulating the concept of neurodiversity and how being autistic might not be the worst thing ever. Many autistic people have found the anti-vaccination movement’s constant squealings of horror about how autistic children should be prevented at any cost to be alarming and insulting. Biss never mentions this and, if this book was one’s sole source of information on the subject, one could be misled to concluding that autism is as awful as polio.

Despite this negligence, Biss’s clarity of thought is well worth experiencing. The sheer scale of subjects she manages to deal with is impressive. Paired with such a fascinating and contentious subject, On Immunity: An Inoculation will inject a wealth of information into your week.