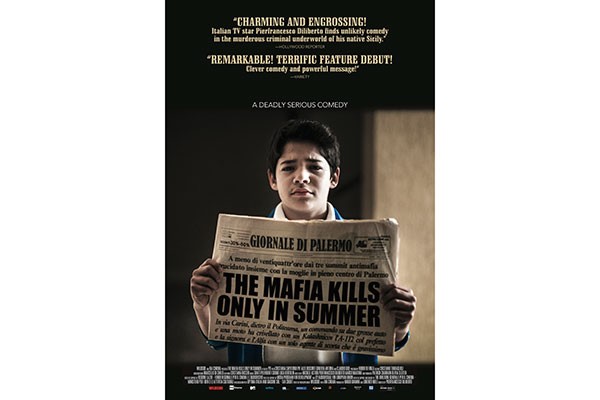 In The Mafia Kills Only in Summer, Pierfrancesco “Pif” Diliberto portrays Sicilian life from the 1970s to the 90s — a time when the Mafia, known as the Cosa Nostra, were fighting for supremacy against government officials. Despite this serious subject matter, this film is actually a black comedy and the Mafia activity is secondary to the main plot, which is about a romantic crush that spans more than a decade.

Set in Palermo, Sicily, the film is narrated by an adult Arturo (Pif), who describes how he has been in love with Flora (Christiana Capotondi) since they were children. Taking the audience back in time to his conception, Arturo explains how the Mafia have played a role in his whole life. Reflecting back on his childhood, the film’s main plot is set in motion when a younger Arturo (Alex Bisconti) falls in love with Flora (Ginevra Antona), a new student in his class. Channelling his idol, Giulio Andreotti, Arturo attempts to win Flora’s affection with a visit to the graveyard and the gift of an iris a day — a scheme that goes horribly, hilariously wrong. Before Arturo is finally able to profess his love, however, Flora announces that she is moving to Switzerland.

Reaching adulthood, Arturo works for television presenter, Jean Pierre (Maurizio Marchetti), as a piano accompanist. Despite being unsatisfied with his job and preferring to be a journalist, Arturo is randomly reunited with Flora on Jean Pierre’s set. Now an assistant for politician Salvo Lima (Totó Borgese), his childhood crush has returned to Italy and even arranges for him to be the reporter for Lima’s campaign. Not only does he jump at the opportunity to work as a journalist, he also attempts to rekindle an old flame. But with the Mafia still dominant in Palermo, his life is once again affected by their actions.

Although Flora’s character seems to fall into the pothole of being a crutch for the male protagonist’s development, Pif’s ability to incorporate archival footage into the comedic plot involving Arturo’s love for Flora creates an engaging balance between history, satire and romance. Pif’s seamless infusion of humour and reality delivers an amusing story with a strong political message.

Tags:   culture film review the mafia kills only in summer