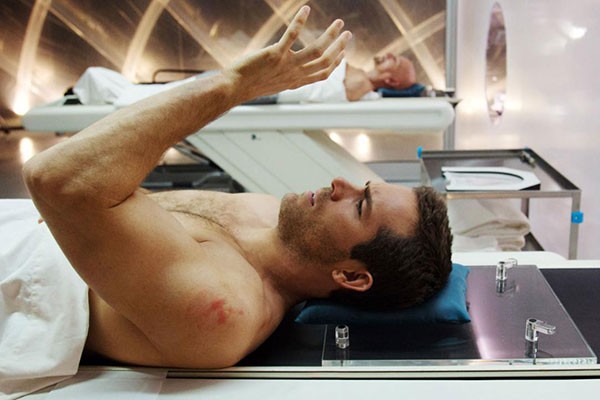 Disappointingly, it turns out that everything good in this movie was packed into the trailer.

Diagnosed with terminal cancer, Damian Hayes (Ben Kingsley) is directed to Professor Albright (Matthew Goode) who tells him about “shedding” — a medical procedure where your consciousness can be transferred to an artificial body. The only side effect of this procedure is vivid hallucinations, which Albright assures Damian can be reduced with prescribed medication. After going through with the procedure, Damian inadvertently steals the body of a younger, healthier family man, Mark Hale (Ryan Reynolds).

Forgetting to take his medication, the protagonist’s vivid hallucinations are of a woman and child in St. Louis. Damian questions Albright about the hallucinations and eventually travels to St. Louis. There, he meets Madeline (Natalie Martinez), who tells him that he is her dead husband. Realising that his body had once belonged to a real person, their lives are placed in danger as Albright’s employees attempt to track them down.

The film’s trailer appears to offer the audience a philosophical debate that asks, “is it okay to save your own life if you take someone else’s?” Instead, Self/less focuses on the gimmick of the mind-transplanting machine and on trying to out-fox the evil black-suited men running it. It is not a story about complex characters facing heartbreaking decisions, but about the MacGuffin itself. With its recycled science-fiction trope, films such as The Island and Never Let Me Go feature much more compelling retellings than Self/less does.

A scant fifteen minutes of Ben Kingsley’s captivating performance is not enough. Ryan Reynolds makes no attempt to act like Kingsley’s established character and, as a result, the film holds very little weight with the audience. Self/less offers us an underwhelming story made all the more dissatisfying by its initial promise.