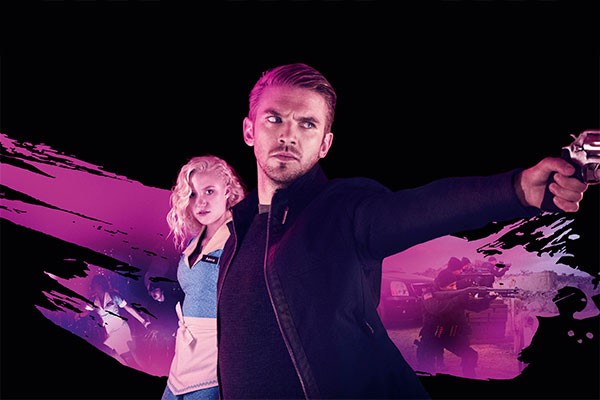 In 2011, director Adam Wingard and writer Simon Barrett debuted their slasher film, You’re Next. The pair have now returned with The Guest — a thriller film with gore and pitch-black humour that offers the audience a slightly different take on home invasions.

Following the death of the Petersens’ eldest son, Caleb (Chris Harding), the family is struggling to cope with the pressures of everyday life. Having promised to look after Caleb’s family, his comrade and former soldier, David Collins (Dan Stevens), ventures to the Petersens’ home and Mrs Petersen (Sheila Kelly) offers him a place to stay. During his time with the family, David becomes aware of the turmoil the family is experiencing. In an attempt to fix the family’s troubles, David assumes the role of surrogate son and older brother figure in the household. Everyone in the family grows fond of David, except for Anna (Maika Monroe), who, despite his efforts, becomes suspicious that he isn’t as genuine as he appears. Learning more about David’s past, Anna slowly realises that her family’s lives are in more danger than she initially imagined.

The Guest is a generic thriller that draws clear inspiration from the 80s direction of John Carpenter, the man responsible for the Halloween franchise. While the film does play on tiresome genre conventions, its sharp writing and strong cast ensure that it is cleverly self-aware. In the role of the pretty boy anti-hero, Stevens is as charismatic as he is terrifying, and the actors who play the Petersens realistically capture the uncomfortable atmosphere that pervades their household. From the passive grieving mother to the father who binge drinks to cope, the constantly bullied teenage son and the reluctant teenage daughter who can’t stand any of them, the actors convincingly fulfil and also deconstruct the archetypal, all-American family.

Although predictable and, at times, ridiculous, The Guest is deceptively intelligent, which makes for a thrilling 100 minutes.