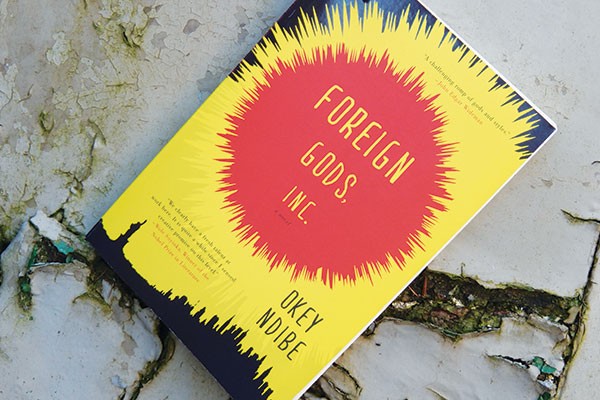 The protagonist of Foreign Gods, Inc. — a novel of magical realism by Okey Ndibe — is Ike Uzondu, a Nigerian living in New York who is unable to get the high-paying work he is qualified for, due to his accent. Instead, he works as a taxi driver. When his green-card-driven marriage ends in a financially lethal divorce, Ike turns to gambling and can’t even make rent. He decides to do business with the titular company, which buys and sells statues of deities from all over the world for exorbitant prices. Ike returns to his home village, Utonki, to a family who think he should have already made big money in America. There, he must steal Ngene, the war god of his people, and return to New York with that god for sale.

It’s hard to define what makes Ike a sympathetic protagonist. His monetary woes are not his fault, since he’s being discriminated against, but it’s not as if gambling is ever a sound financial choice unless one is cheating. His ex-wife is an unpleasant person, but he knew that when he married her, and since the marriage was never supposed to be a real commitment, he probably should have made an arrangement where she couldn’t take all his money. His family in Nigeria keep sending him emails asking for money, and he doesn’t email back to explain that he has no money, instead he just leaves the emails unanswered. Yet something about Ike is inherently likable. It might be because of the honesty of the book’s narration. It might be that Ike’s situation is somewhat relatable; not having enough money to be able to make sensible decisions is truly frustrating and all too common. Whatever it is, Ike actually has the charm that so many hapless everyman protagonists are supposed to and never do.

There’s a sub-plot about Ngene’s victory over a deeply unpleasant missionary that exists almost independently of the overall narrative, and therefore reads like a separate short story. However, it does illuminate Ike’s bewildered half-faith in Ngene, and is an excellent and amusing piece of satire by itself.

Unfortunately, at some point it was decided the reader couldn’t experience this particular sub-plot satisfactorily unless the whole thing was in italics. Italics have their uses, but anything that goes on for 27 pages should really go without them.

A lot of what happens in Foreign Gods, Inc. is unpleasant. Ike suffers through many social situations that are a strange mix of comedy and supremely uncomfortable. Some of humanity’s worst flaws, greed and selfishness and nastiness, are presented in a way that’s too real to laugh at and yet too silly to not. With a more cynical tone, Foreign Gods Inc. would have made a good black comedy. Ndibe’s tone is completely matter-of-fact, and the result is the uneasy emotional experience that is good satire; something so ridiculous shouldn’t be so true.