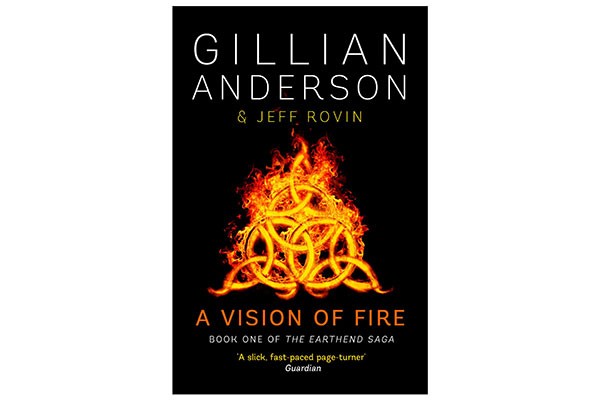 A Vision of Fire: Book One of the Earthend Saga

AVision of Fire: Book One of the Earthend Saga is a science-fiction thriller by Gillian Anderson and Jeff Rovin. As a sticker on the front aggressively proclaims, Gillian Anderson is the actor who played Dana Scully in The X-Files. After an attempt is made on India’s ambassador to the United Nations, his daughter, Maanik Pawar, starts self-harming. She starts having hallucinations and speaking in a bizarre language that seems to combine aspects of Japanese, Mongolian and Old Norse. Due to rising tensions between India and Pakistan, the situation is too delicate for Pawar’s illness to be made public, so child psychologist, Caitlin O’Hara, is called in to treat Pawar privately. With global political situations wobbling around her, O’Hara must discover what force is causing Pawar’s symptoms in order to prevent her dying from them.

With two authors, it’s difficult to know who to credit, but Anderson and Rovin have produced a book that has an incredible respect for people. Unusually for a thriller, none of the characters are forced into the role of villain. People simply have their own priorities, which do sometimes impede on the protagonist, but not because a character is actively trying to make something bad happen.

O’Hara has to visit Haiti at one point, and while I can’t speak for the accuracy of the authors’ depiction of Voodou, it isn’t demonised or belittled. O’Hara also has a ten-year-old son who uses sign language, and her interactions with him sound like someone spending time with an actual child and enjoying their company.

This positivity does has the added effect of making less positive aspects stand out. Namely, the character of Ben, who serves as O’Hara’s love interest, and who treats her with gentle, cloying patronisation. The romance sub-plot consists of that trope in which a male-female friendship of long standing turns romantic when the woman decides she’ll relent and make out with the man who’s been low-key hinting he’s hot for her the whole time: “… she gently pulled his head down and kissed him. He did not mind the interruption. To the contrary, it was something he’d been waiting patiently for — not just tonight but since he’d first laid eyes on her.”

A Vision of Fire still deals gracefully with a lot of big ideas. The end result is probably better described as fascinating rather than thrilling, but Anderson and Rovin have created a work worth experiencing.

Tags:   culture books review a vision of fire: book one of th