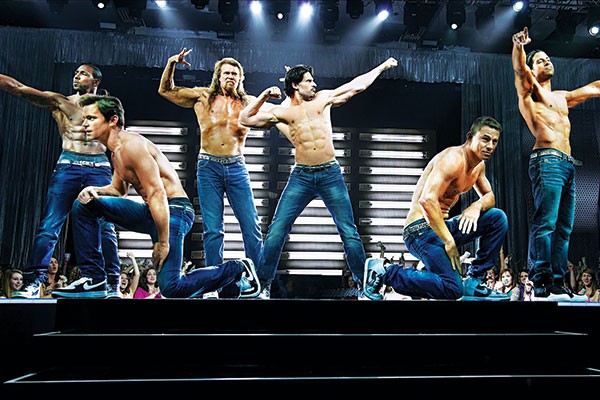 Steven Soderbergh’s Magic Mike was a low-budget arthouse tragicomedy about male strippers that surprised audiences with its narrative depth. Now removing the “tragedy” and substituting the “arthouse” with “road trip”, Gregory Jacobs’ Magic Mike XXL brings about a delightfully entertaining, after-dinner mint of a film.

Three years after the first film, “Magic Mike” Lane (Channing Tatum) has bowed out of his destructive stripper lifestyle in Tampa, Florida, and now owns a furniture business. After receiving a call from Tarzan (Kevin Nash), who tells him that his former boss, Dallas, has “gone”, Mike reunites with his former fellow strippers, the “Kings of Tampa”, and learns that Dallas has started a new show in Macau. Wanting to end their stripping careers on a high note, Ken (Matt Bomer), Big Dick Richie (Joe Manganiello), Tarzan (Kevin Nash), Tito (Adam Rodriguez) and Tobias (Gabriel Iglesias) convince Mike to go on one last trip to Myrtle’s Beach for a stripping convention.

The film is visually delightful, possibly even more so than the first, and I’m not just talking about the physiques of the strippers. The film beautifully exposes the bright, dark, synthetic and natural scenery that the men find themselves in as they traverse different places, ranging from drag queen bars to a soul jazz club.

Magic Mike XXL also features an interesting meta-narrative on the nature of people’s demands for more voyeuristic entertainment. The influence of Tatum’s life on the screenplay was made more evident upon hearing the news that this will be his last film in which he removes his shirt. Certain aspects of the light-hearted encore to Magic Mike retain at least a little bit of credibility in terms of depth, even if it is tarnished with some really cringe-worthy product placement mid-dialogue. However, anything slightly “deeper” than the otherwise superficial story of this fun road trip is only touched upon, and never fully developed.

Although it certainly does not reach the level of charm its predecessor had, Magic Mike XXL is an entertaining and hilarious film, making for an upbeat sense of closure for returners and a fun treat for newcomers.