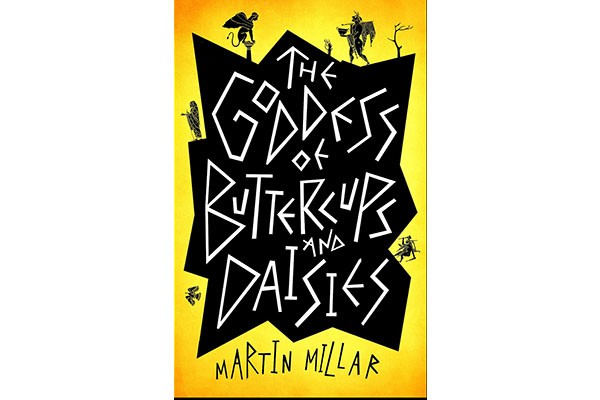 The Goddess of Buttercups and Daisies

Martin Millar’s novel, The Goddess of Buttercups and Daisies, is set in Athens, 421 BC. During this time, the city-state of Athens is at war with Sparta, and has been for ten years. The playwright Aristophanes wants to put on a comedy called Peace for the Dionysia Festival, as his entry in a competition he failed to win the year before. But certain people don’t want a play about peace produced; these include the man who is supposed to be acting as Aristophanes’ producer.

While the goddess Athena is on Aristophanes’ side, the only help she can send is a scowling Amazon warrior who dislikes art and culture, and a nymph who’s been pretending to be more competent than she really is. The pair unite with Luxos, a poet who really wants some attention paid to his poetry, and the three of them must help Aristophanes put on a play that will triumph over all the people interested in prolonging war in Athens, a group that includes a literal goddess of bad decisions.

The Goddess of Buttercups and Daisies is a very light-hearted comedy that never really rises above gently amusing. The most entertaining part of the book is when Athena goes looking to enlist the great river spirit, Metricia. She isn’t there, and a person tells Athena that the spirit “was depressed by all the fighting so she changed back into a river and moved away”. Athena scowls and says, “I hate it when you need someone and then you find out they’ve changed into a river and moved away.” So, yes, a gently amusing book, at best, but at least it never descends into painfully unfunny, as comedies can do.

The book is weirdly heteronormative for a story about the society of ancient Greece. Although the style of male romantic attachment the Greeks went for is hardly the stuff of light comedy in modern eyes (since adults fetishising young teenagers is considered creepy), Millar still describes a highly successful female sex worker as well-established in her profession by the age of fifteen. By being perfectly willing to mention the historical sexual exploitation of girls, Millar is imbalanced in his writing. There are a few references to gay relationships way in the background, but if you only read this book, you would get the impression that ancient Greece’s ideas about sexuality were exactly the same as Millar’s, which seem to consist of fluffy straight love and only eroticising women.

There’s also some sloppy editing going on. The book is told in third person from the point of view of many different characters; structurally, it is divided into short sections marked by the name of the character whose point of view it is. But this isn’t always consistently done. Then the end of the book creates even more inconsistencies by breaking out into sections titled after random places and activities. Although the book’s structure was jarring to begin with, it feels completely and unreasonably thrown out by the end. The Goddess of Buttercups and Daisies has its good points but, as a whole, it never really rises above average.

Tags:   culture books review the goddess of buttercups and da