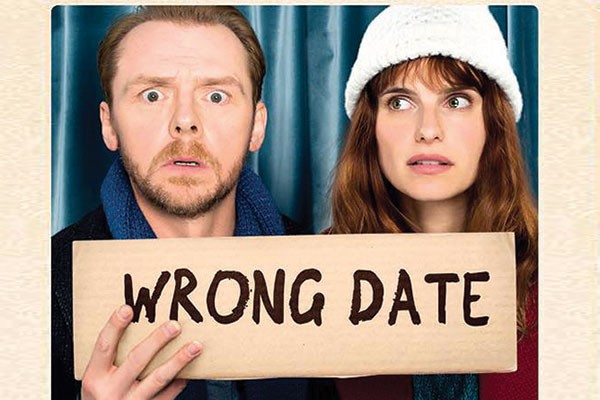 Unfortunately, the title is not ironic. But don’t let this be off-putting: Man Up is an entirely self-aware film and doesn’t set out to subvert genre tropes but, instead, fully embraces them. For the most part, Man Up entertains due to its sharp script delivered by strong lead performances, which creates a frivolous but ultimately endearing story of accidental love.

Man Up begins with Nancy (Lake Bell), a cynical, socially awkward and commitment-phobic thirty-four-year-old, meeting a young woman named Jessica (Ophelia Lovibond), who sees through her negative personality. After a conversation on a train, Jessica leaves a self-help book with Nancy, who has fallen asleep. When the protagonist wakes up, she storms off the train and tries to return the book to Jessica but, instead, she is approached by Jack (Simon Pegg), a man who mistakes her for Jessica because the book was supposed to be a signal for their blind date. Nancy decides to take a chance; she pretends to be Jessica and goes on the blind date in a plot that could be described as the Catfish of romantic comedies.

The film’s strongest component is Lake Bell — she channels Bridget Jones and pulls off a very convincing British accent, one so convincing the majority of the crew didn’t even realise she was American until production was over. However, not all of the characters are as likable —Sean (Rory Kinnear), a creep from Nancy’s past who appears to be comedic relief, often left me feeling uncomfortable rather than amused as he attempted to blackmail Nancy into sexual favours in exchange for keeping her identity a secret.

Man Up could have been a generic and predictable drag if not for the brilliant chemistry and tension between Lake Bell and Simon Pegg, whose on-screen presence overcomes a lot of the film’s flaws. The two leads keep the film at a consistent rhythm with their well-delivered dialogue, which manages to make this overnight journey through London a mostly enjoyable one.