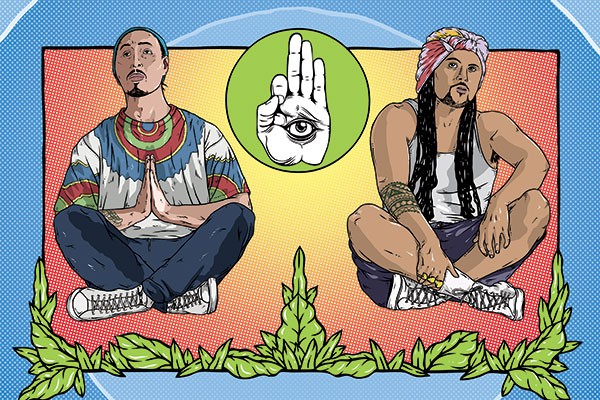 Third3ye are not your average hip hop collective — instead of your typical bars they bring a spiritually-conscious form of hip hop. Third3ye are part of this year’s Re-Ori line up, so Critic music reporter Daniel Munro caught up with Bronson, one half of Third3ye, to talk all things from influences to the illuminati.

Critic: First up, tell us about yourself and give us your top three songs on your iPod at the moment.
Bronson: I’m MeloDownz, aka Bronson, member of Third3ye cult. My top three songs I’ve been jamming to lately are Nickelus F — “Cigarettes”, Mick Jenkins — “Shipwrecked”, NxWorries (Anderson Paak and Knxwledge) — “Suede”.

Critic: Nice! So you guys break the mould of typical hip hop, touching on philosophy to environmental issues. What has influenced your content?
Bronson: Mostly my background growing up, my mother was into her crystal healing, meditation and readings, etc. I never used to acknowledge it until I got older and, as an artist, I like the approach and ideas of open-mindedness. I think there is way more going on in the universe than our planet, and I like talking about possibilities about discovering the unknown on other planets and life.

Critic: You both have worked on solo projects. Do you find making music as a group any different to your solo material?
Bronson: It is definitely different than our solo stuff; Angelo and I have different stories to tell, and working on our solo endeavours enables us to have that platform to express ourselves as individuals and have a more personal take on the music we make. My solo stuff is more raw and based on my background as I narrate stories I’ve experienced or seen growing up in Avondale.

Critic: Obviously the “third eye” symbology has been used by illuminati conspiracy theorists. Can you guys clear up its true meaning and what its influence is in your music?
Bronson: The third eye to me is the inner eye and self-intuition. In your brain you have a pineal gland that releases dimethyltryptamine (DMT) naturally, which secretes sleep and also allows you to get to a higher platform of consciousness — it’s also the ajna chakra, which are energy systems within your solar plexus. When you hear us say “open up your third eye” at our shows, that’s a metaphor for saying stay open to the possibilities, drop the ego and open up your mind. I don’t really understand why they relate the third eye to illuminati. We are far from what they represent. We are just some poets from the light side spreading the love and being human.

Critic: Red Bull have given you guys a lot of help with recording and shows. How did that relationship come about?
Bronson: It all started from a phone call from Tom Scott — at the time we were kinda just doing our own thing. He was chosen as a curator for the Red Bull Sound Select platform and given the responsibility to choose three decent acts from the YGB collective to be a part of the New Zealand roster; we were lucky enough to be chosen. Red Bull have been really helpful to push our music to the masses and get some pretty big shows, and were also generous enough to give us some studio time to master our last album, On3ness.

Critic: It’s been a year since your last project, On3ness. Can you give us any insights into another release?
Bron-Sun: We have been taking our time on this new project — we want it to be quality, from the vocals, beats, musicality and instrumentations. There’s no release date as of yet as we keep writing new stuff, but the wait will def be worth it.

I’ll be dropping a solo mixtape later on in the year though, so keep a third eye out for that too! We can’t wait to come and bring the vibes to Dunners — it’s been too long!