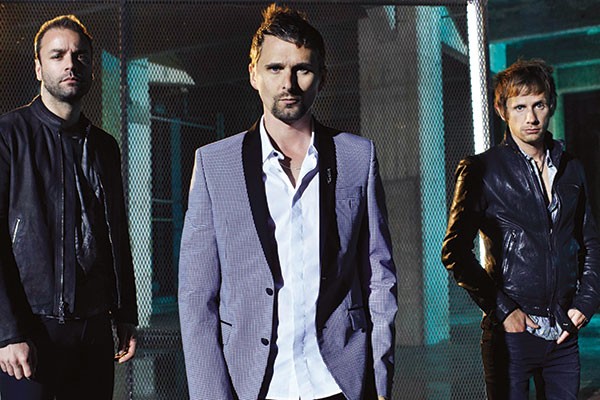 Regardless of whether we asked for one, Muse are back with a new album. Believe it or not, Drones is the seventh full-length LP from the English trio. When Muse first emerged in the late nineties, they were just another Radiohead clone. Over the next few years they forged an identity of their own, mixing progressive-rock pomposity with pop melodies to decent effect. As they grew in popularity, however, Muse also grew in vanity. To match the scale of their histrionic live shows, the songwriting became almost painfully over the top. By 2009’s The Resistance, the band itself could barely be heard above the sea of strings, orchestras and synthesizers that Muse insisted on piling atop every song. Muse’s “more is more” philosophy had utterly backfired. One would be hard-pressed to find even a Muse diehard who will defend The Resistance or its dubstep-infused follow-up, The 2nd Law.

After the grotesque grandiosity of their recent work, Muse promised a back-to-basics approach on their new album, Drones. As its name suggests, Drones fancies itself as a politically charged concept album. According to egomaniacal frontman, Matt Bellamy, Drones details “the journey of a human, from their abandonment and loss of hope, to their indoctrination by the system to be a human drone, to their eventual defection from their oppressors”.

To nobody’s surprise, this album is no 1984 in its political commentary. The anti-establishment narrative of Drones has all the subtlety and depth of a Michael Bay movie. Groan-inducing lyrics include “Yeah, I’m free from society, you can’t control me” and, well, just about any line from “Psycho”.

For fans of CGI bombast, however, Drones is also as generous with its explosions as a Transformers film. Songs like “Psycho” and “Dead Inside” deliver blockbuster riffs and choruses with aplomb. Thankfully, Muse sound less like a Queen cover band this time around. While Drones certainly aims for enormity, the emphasis on riffs rather than operatic grandeur makes for a more corporeal album.

Unfortunately, the fact that Drones is more focused than Muse’s last decade of material is hardly saying much. And for most of its twelve tracks, the songwriting just isn’t inspired. Many songs feel like pale imitations of previous Muse numbers, from the pathetic “Starlight” rehash, “Mercy”, to the sprawling mess of “The Globalist”, which is really just a poor man’s “Citizen Erased”. That isn’t to say that it’s all bad. There is fun to be had with the pelvic-thrusting opener, “Dead Inside”, and “Reapers” actually warrants repeated visits. With blistering guitar riffs and a catchy, Collective Soul-esque chorus, “Reapers” is far and away the best song here. One can’t help but wish the rest of Drones were as compelling.

Drones isn’t a deplorable record, but it is far from a great one. Muse have been shockingly inconsistent since Black Holes & Revelations, a result of trying to please too many people at once. You’re into progressive rock? Right this way. How about dubstep and Queen homages? We’ve got you covered. What Muse really needs is a solid, creative, nuanced record to restore our faith in them. As much as I’d like it to be, Drones is not that album.