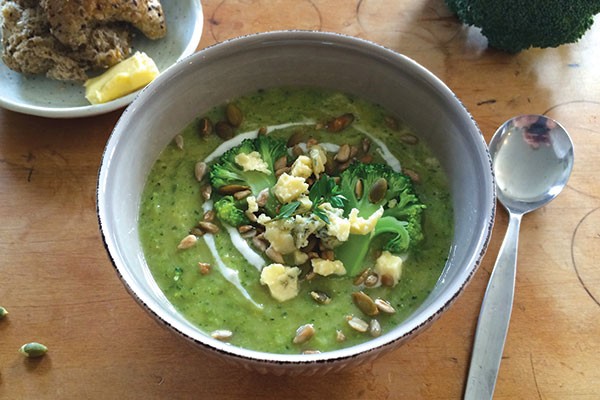 Broccoli soup came up on my Instagram feed the other day, and the vibrant bowl of green caught my eye. I just had to have some. Conveniently, the Universe agreed and made all the greens required super cheap at my local vege shop.

Junk Free June continues, and while the lack of cake has been soul destroying, it has forced me to experiment with new healthier recipes. I know this says blue cheese in the title, but I am going to claim that cheese in small amounts is healthy. Eliminating it altogether would make life just not worth living. Let’s not forget what a great source of calcium it is too. The great thing about buying a good blue is that a little goes a long way in terms of flavour impact. The creaminess and flavour given by the blue just adds that extra oomph to the soup — without it, this would just be a hot and salty green smoothie.

I used a golden kumara rather than an orange or a red. I didn’t want to dull down the green from the broccoli, but worst-case scenario just use whatever you have on hand. The kumara makes it lovely and slightly sweet, which complements the cheese nicely.

My vege shop often has bruised or damaged produce and sells it on the cheap. I managed to get a bag of four courgettes for a little under $3. Sure, I had to chop the end off one of them, but they didn’t need to look pretty — they were about to be blended into a soup.