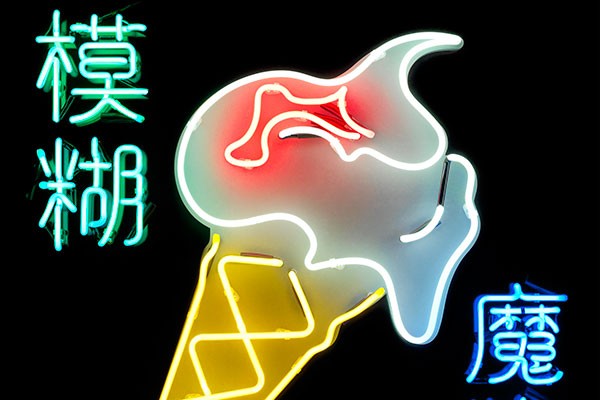 Well folks, it actually happened. Six years after reforming, and twelve since their last studio outing, Blur are back. There are several reasons why this is great news. For one, Blur always represented the more irreverent and artful side of the Britpop era. Though Blur penned some of the most anthemic songs of that genre, they also managed to not succumb to Britpop’s excesses. As a result, their music still sounds as vibrant now as it did back in their heyday. Furthermore, The Magic Whip marks the return of Graham Coxon, the band’s iconic lead guitarist. With the exception of one song on 2003’s Think Tank, Coxon hasn’t played on a Blur album since 1999.

But according to Blur, all this isn’t such a huge deal. Everything about The Magic Whip, from its quiet release to its pop-art album cover, suggests that you shouldn’t take it too seriously. Musically, it’s a fairly humble record. Many songs are comfortable, quintessential Blur, from the Modern Life Is Rubbish-like opener “Lonesome Street” to the grungy pop of single “Go Out”. Thanks to the return of producer Stephen Street, The Magic Whip has the bite Think Tank sometimes lacked. With references to Hyde Park and the London Underground, The Magic Whip often feels very British.

That isn’t to say, however, that vanilla is the only flavour The Magic Whip has to offer. There are small splashes of dub, Afrobeat and psychedelia throughout, sure to please fans of the eclecticism of Think Tank or Damon Albarn’s other project, Gorillaz. Damon appears to have fallen deeply in love with Asia, making references to junk boats, Pyongyang and monasteries in Hong Kong. At times, the globetrotting lyrics and moments of foreign beauty can feel a little exoticist, as though the band members are shoving their passports in your face and excitedly pointing out all of the visas they have had stamped. Thankfully, there is an ambivalence in the lyrics to a song like “Pyongyang” that reassures us that Albarn isn’t romanticising the cultures of which he sings.

When Albarn’s eyes aren’t on the horizon, he turns his gaze inwards and comes out with some truly lovely slices of introspection. On “There Are Too Many of Us”, he laments the digital age, singing “For a moment I was dislocated, my terror on a loop elsewhere.” The buoyant “Ice Cream Man” sees Albarn yearn for the amorousness of his youth, singing “I was only twenty one … I was racing in my heart back then.”

Regardless of its lyrical or musical style, The Magic Whip feels comfortable, as though Blur never really went away. Unfortunately, that also means the stakes feel pretty low. For all of its multiculturalism, The Magic Whip can’t help but feel like Blur treading water to a degree. But let’s not look a gift horse in the mouth. The fact Blur came back at all, especially with Graham Coxon on board, is something to be grateful for. The Magic Whip is a solid album, and fits happily alongside Blur’s other records.