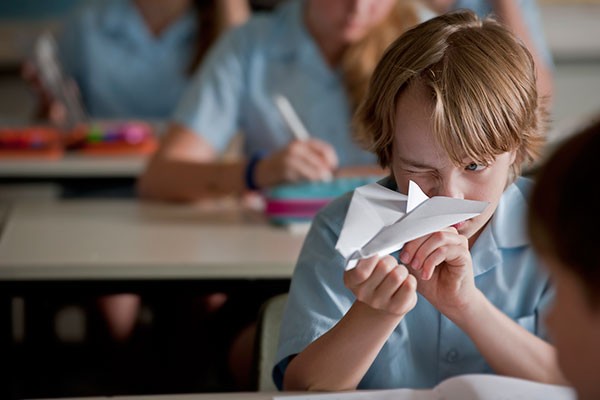 Why do I care about Dylan’s paper plane quest? After 96 minutes, this question has not been answered.

Paper Planes is about an average 12-year-old Australian boy called Dylan (Ed Oxenbould), whose dead mother imparted to him the gift of folding the perfect paper airplane. His passion for paper planes fuels his goal of winning the World Paper Plane Championships, which are held in Japan. Dylan’s father is a deadbeat who is still grieving over the death of his wife. The only person who seems to truly believe in Dylan’s life-changing, golden-ticket dream is his spritely, veteran World War Two RAAF fighter-pilot grandfather (Terry Norris), who gets into all kinds of mischief with the protagonist.

Just like every 12-year-old kid in these types of films, there is also an intriguing love interest to be won over and bullies to deal with. Unfortunately, Dylan can only seem to make friends with animals; his rival, Jason (Nicholas Bakopoulos-Cooke), is more popular and mocks him at every step, while surging ahead in the paper plane competition. Isn’t this just Ash Ketchum facing Gary in some Pokémon battle now? Dylan eventually gets taken under the wing of Kimi (Ena Imai), who helps bring his dream to life in a Karate Kid-like way, which ties the film together with a neat and boring end.

Not only does Paper Planes have a dull plotline, it also heavily copies moments from other films such as Love Actually, Karate Kid, The Fast and the Furious and Charlie and the Chocolate Factory. With its pilfered film tropes and over-dramatisation of a 12-year-old’s life, many older viewers will be left with absolutely nothing interesting or original to say about the human condition that could draw my attention away from, you know, grown-up, real-life issues like the fact that my tiny bag of M&Ms now costs $7.70.

Paper Planes is a tiresome film that mashes together the best parts of successful and well-known films but, in doing so, fails to achieve what those movies did so effortlessly; instead, we are left with an overdone plotline and eye-roll-inducing moments as we’ve all seen those scenes before.