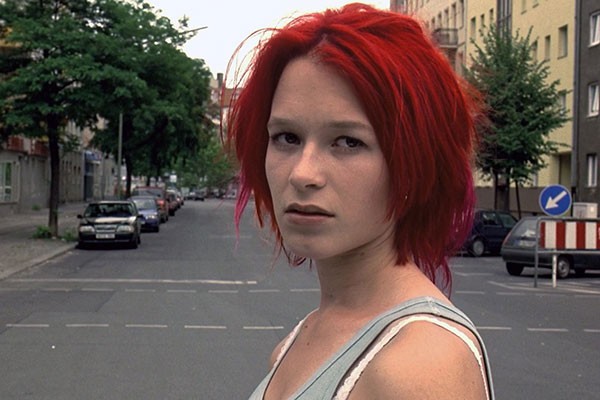 Run Lola Run is a unique, adrenaline-fuelled film with an urban angst reminiscent of The Matrix and Fight Club and Guy Ritchie-esque atmosphere. However, the film stands easily on its own. With techno music, parallel universes and the late 90s involved, I can unreservedly say that Run Lola Run has something for everyone.

As you can probably guess, the film is about a woman named Lola, played by Franka Potente, who rapidly moves between places in Berlin with the use of her feet. Anyone who has spent as much as ten minutes in Berlin can probably tell that Lola’s journey makes no geographical sense but, rather than confusing the audience, it accentuates the plotline. When her boyfriend, Manni (Moritz Bleibtreu) loses 100,000 Deutsche marks belonging to his gangster boss, Lola has 20 minutes in which to somehow obtain the money and save his life. We see the events of these 20 minutes unfold three times, and each time things play out a little differently. The butterﬂy effect is in action as small variations have larger and larger repercussions further down the line.

The ﬁlm’s techno soundtrack is a huge part of its character; since it’s right out of the late 90s, it sounds a little dated now, but it’s still awesome. Tom Tykwer, the ﬁlm’s writer and director, was also the composer and, as a result, the soundtrack ﬁts in perfectly; it’s hard to imagine the feeling of urgent running being better captured in other types of music. Run Lola Run also makes effective use of the classics with tunes from Dinah Washington and Charles Ives.

It’s also quite a dark ﬁlm; the premise is kind of grim and almost every supporting character is a horrible person — even the ones who have only a few seconds of screen time. Initially, this is a bit overwhelming, but it doesn’t take long before you’re completely drawn into Lola’s three stories and the action that occurs within these parallel universes.