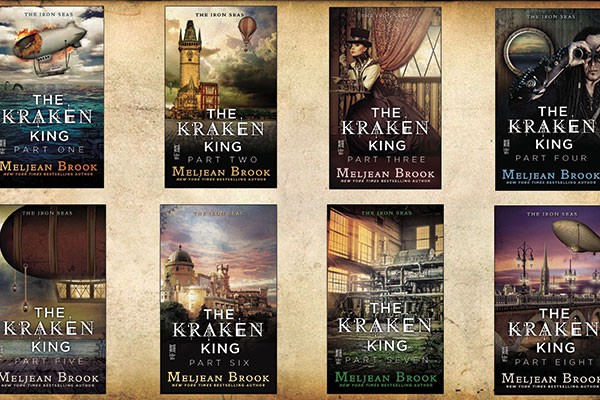 For those hiding under a rock, steampunk is a subgenre of science fiction that incorporates steam-powered devices with Victorian design. The Kraken King, by Meljean Brooks, is a steampunk romance novel, and for once it had all the fun adventure, cool technology and body horror that people always assure me steampunk has.

The Kraken King tells the story of Zenobia, a writer travelling incognito with two mercenary bodyguards. She is accompanying her friend, Helene, on a journey when their airship is attacked. Zenobia is rescued by Ariq, a former revolutionary who now runs a small town in Australia called Krakentown. Ariq and Zenobia instantly want to bone, but he believes she is a spy and she has horrendous trust issues. This combines with outside political forces; drama ensues.

It took me a while to like Zenobia. The narrative introduces her as irritated by her supposed best friend. Their relationship never stops being something Zenobia has to make an effort with, and the way the narrative talks about Helene is always slightly condescending. I see this a lot in books aimed at women, and I never like it. If you don’t respect someone, struggle to enjoy their company and have to constantly remind yourself of their good qualities to avoid yelling at them, that person is not your friend. One of Zenobia’s most important motivations is looking after Helene, but she barely ever seems to enjoy her company. The Kraken King is crawling with awesome ladies being badass and Zenobia is definitely one of them, but the first impression wasn’t great and the issues with Helene never went away. Still, I became fond of Zenobia. And Ariq nicely balances compassion with the alpha-to-infinity-and-beyond quality so prevalent in romance novel heroes.

Steampunk annoys me because it is often so terribly implemented. Romance annoys me because many of the traditional tropes of fictional romance are frustrating. Ariq is described as having hard muscles. That’s the opposite of appealing to me. Brooks spends the first third of the book mentioning Ariq’s hard muscles every five pages. Possibly this was meant to portray attraction, but to me it read as “by the way, the muscles are still there; hard, muscular guy is still muscly” and it got on my nerves. At one point during a sexy make-out scene, Ariq tears Zenobia’s clothes. I cannot imagine anything less sexy than damage to my clothing. If you tear my clothes on purpose outside of an emergency, any relationship we may have had is over, I will hate you forever and you owe me money. Despite this novel being upfront and sex positive in all other aspects, Zenobia is a virgin by sheer virtue of never having really wanted to bonk a dude before. Even though she wants to insta-bone Ariq right away. This is totally contrived and undermines all the other perfectly acceptable feminist noises The Kraken King makes.

I am fairly sure Brooks is already steampunk famous, so if you’re a fan of the genre, you’ve probably heard of her. But if you’re a fan of hard muscles and high adventure and interested in trying steampunk, by all means go try this book. It’s entertaining, which is all I’ve ever asked for.