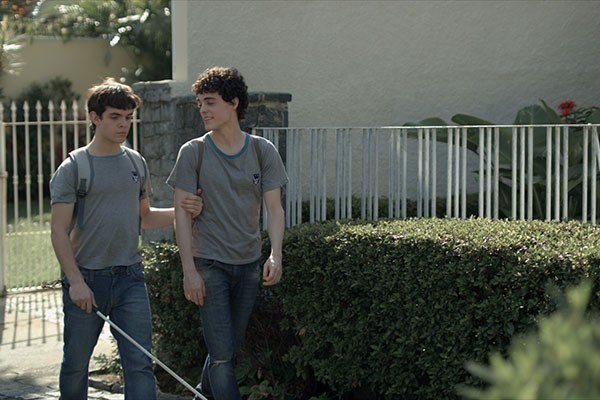 Soon to be classic

I fondly associate The Way He Looks with a friend who is on the other side of the world. When I told him that I would be reviewing this soon-to-be classic, he described the moment as “serendipitous” — he had watched the film only a few days ago while on a train to Washington DC. The Way He Looks has a warmth to it — one that brings people together, no matter the circumstances — due to its cheek-squishing plot and the authentic performances from an astounding cast.

The Way He Looks follows a typical coming-of-age plotline, but there’s something more to the story. The film centres on Leo (Ghilherme Lobo), a blind high-school student who yearns for independence — something his parents and even best friend Giovanna (Tess Amorim) don’t really give him. His parents fuss over the slightest things, and although Leo’s friendship with Giovanna is sweet — she walks him home after school every day — the way she’s always watching over him verges on unbearable. Leo’s blindness doesn’t make him feel different but, rather, the way people like his parents act around him adds a little something extra to his growing pains. One growing pain in particular for Leo is the fact that he has yet to be kissed by someone and is under the impression that no one is interested in ever kissing him.

When a new student named Gabriel (Fabio Audi) joins their class, he soon becomes friends with Leo and Giovanna. As Leo spends more time with Gabriel, he begins to develop feelings for him, while also experiencing doubt and insecurity. Their friendship affects many aspects of Leo’s life, and when it eventually evolves into a budding romance, it is one that is looked at with eager eyes and pure elation.

The Way He Looks almost interrupts the beautiful moments captured between Leo and Gabriel, as there are times when it becomes a victim of young adult film tropes. However, Ribeiro’s ability to capture and meticulously cultivate those moments makes the audience forget about the recycled aspects of the script. Instead, the audience is given a film that is memorable, vibrant and incredibly sweet.