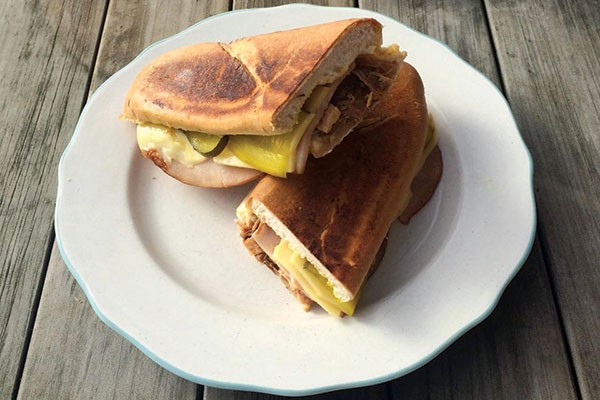 This is essentially just an epic ham and cheese toastie. They are called Cuban as they are most commonly found in Cuban immigrant communities in the States and are frequently consumed as a workday lunch.

I used a leg joint of pork (shoulder was preferable but not as cheap), rubbed it with spices and left it to melt away in my slow cooker overnight, all ready for the morning sandwich fest.

While the idea of starting prep for this 12 hours in advance seems like a lot of effort, let me assure you that it isn’t. You will yield a massive amount of pulled pork from this, which you can use for a few meals. It can also be frozen ready for the next time you are hankering for a pulled pork taco or slider.

These are traditionally made with Cuban bread; the closest thing to that in NZ supermarkets is Italian bread. It has a short crumb and a soft crust, making it ideal to squish down into a flat-ish sandwich.

The quantities here are just guidelines. Of course, put more pork or cheese into these if you wish.

To assemble the sandwiches, preheat a large frying pan to a medium heat. Take your bread rolls and slice them lengthways. Press down on the bread to compress and flatten it (this will make it easier to toast). Spread butter over the outer surfaces of each half. Spread the inside of one of the halves with the mayonnaise and the other with the mustard. On top of the mustard, start layering on the ham, then pulled pork, then pickle, then cheese. Secure the top and place in the hot frying pan. Once the first side is golden brown, flip and cook the other side until it too has browned and the cheese has begun to melt. Remove from the pan and slice into two halves.

Combine the spices, thyme and salt together. Place the sliced onions in the base of the slow cooker and rest the pork joint on the top. Rub the spice mix and garlic over the pork and sprinkle the excess into the slow cooker. Drizzle over the honey and pour over the red wine vinegar. Put the lid on and cook on high for 8 to 10 hours or overnight. Carefully remove the pork and onions from the slow cooker and dispose of the excess fat and bones. Use two forks to shred the meat apart, transfer to a bowl and mix in half to a full cup of the cooking juices to keep the meat moist.