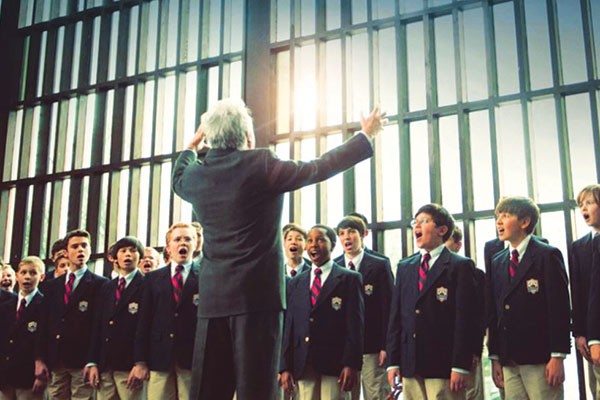 There’s a fine line between a feel-good film and a predictably cheesy one. No matter how uplifting or audibly and visually stunning Boychoir is, Francois Girard’s drama teeters along this line like it’s a tightrope. Unfortunately, this film leans towards the predictable side on more than one occasion.

Boychoir stars Garrett Wareing as 11-year-old Stet, an angry boy from Texas. After the death of his alcoholic mother and with the financial assistance of his estranged father, Gerard (Josh Lucas), Stet is placed into a private boarding school that specialises in music. It is at this academy that Stet can improve his promising treble voice. When Stet first arrives at the National Boychoir Academy, located in New Jersey, he is met with cold stares and finds it difficult to fit in with his peers. He also receives doubtful remarks from the tough-loving choirmaster, Carvelle (Dustin Hoffman), as he attempts to get Stet and the rest of the boychoir to reach their full singing potential.

With well-thought-out shots that highlight either the grittiness or the beauty of each rise and fall in the narrative, accompanied by both on-screen and off-screen performances of orchestral and choral music that paint an audible background for the rest of the film, the film is exquisitely made. Wareing’s performance as the adolescent Stet is emotionally compelling and he is easy to empathise with — despite being more of an anti-hero than the typical Billy Elliot. Hoffman’s sharp acting also leaves an impact not only on Stet’s character but on the audience as well.

Unfortunately , Boychoir utilises dialogue as much as it does music and, as such, drags down a lot of its own merits with an incredibly uninspired and dry script. While the actors are not brought down completely by the tired system that scriptwriter, Ben Ripley, has thrust upon the film, it does completely unravel any genuine care the audience may have for the narrative.

Regardless of the film’s gorgeous aesthetics and soundtrack, Boychoir is too clichéd for an audience to be completely invested in. It is one thing to become enthralled by characters, but it is another thing entirely to watch entertaining people mindlessly move through an unoriginal storyline.