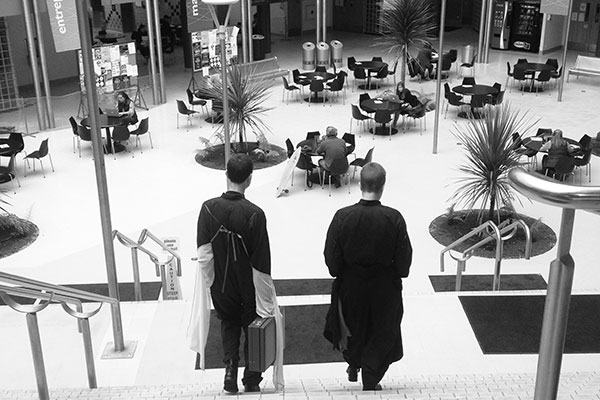 The first time I met artists Zoe Crook and Aodhan Madden was at the Blue Oyster Art Project Space while they were partway through initial preparations for their Fringe Festival performance piece, “Suspicious Minds”. They had moved the office to a back room, covered the entire front window and planned to set up a whiteboard with a seemingly random list of nouns, which they planned to tick off each day.
The second time I met the artists was on the steps of St Paul’s Cathedral. Both artists were still dressed in the blue overall and karate pants attire, but this time Zoe held a bucket and sponge to clean the steps with and Aodhan held a copy of The Art of War to read to her from while she cleaned. The two sat down with me to discuss their experiences in Dunedin and observations created from these.

Aodhan: I feel like we look like a church ornament with our clothes.
Zoe: We’ve been told we look very religious.
Aodhan: What place does religion hold for people when they are trying to assess something? Today viewing someone as looking religious feels like a person is saying, “you don’t fit into the normal order; therefore, there must be some sort of higher cause for you to be doing this or you must be with God.” But we’re not in that sense. We’re interested in the divine but not in an active way with this project.
Zoe: We don’t want what we’re doing to be definitive...
Aodhan: ...or programmed, but there are things that we’ve become interested in through our processes.
Zoe: The act of being is very much a part of the performance — walking through public space, being in the public eye, interacting in the supposed social side of the city.
Aodhan: It’s been interesting when we’ve gone to Glassons and Hallensteins. The shop assistants clearly know we’re something else and we’re not there to buy the product. This division becomes uneasy. There’s disruption and confusion.
Zoe: We went into these stores and attempted to investigate and understand what it is to be a man or a woman. We had a conversation between us about what symbols were in the store.

What uneasiness was created?

Zoe: The shop assistants didn’t know what to do. We stood in the middle of the stores and had a conversation. Their initial reaction was to find out what we want because then they can help us and make a sale. But we didn’t want to buy anything, so we didn’t — in their eyes — belong in the store. They didn’t understand our intentions.
Aodhan: We also went to New World and we walked around the store, making random decisions where to go. If our paths met we had this briefcase that we would change over. People were generally freaked out. The management thought we might have something to do with the baby milk scandal in New Zealand.
Zoe: Maybe in the same way the Glassons and Hallensteins shop assistants didn’t know how to deal with us. Maybe because they couldn’t put us in a box, they resorted to thinking that we might have been there to steal something.

And so you were creating suspicious minds? You were going into spaces that had clear constructs on how you should act, and by not following these norms (in a completely harmless way) you were immediately seen as suspicious and negative.

Aodhan: So much of our show has hopefully been about engendering some kind of suspicion in the viewer or interactor.
Zoe: Oh, everyone is pointing out the vomit on the steps. Maybe I should get onto that. We might properly clean the steps before church tomorrow.

So you’re pretty open-minded with your schedule?