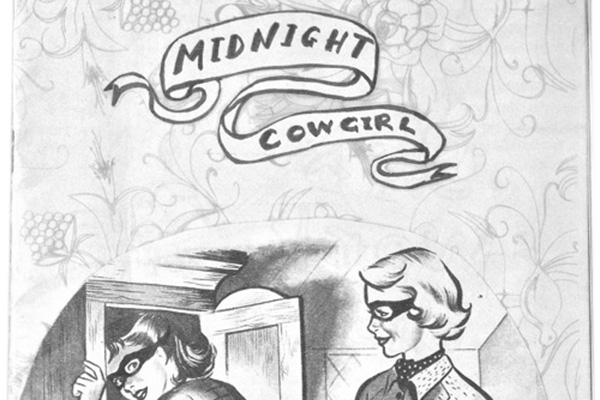 Zine of the week - Midnight Cowgirl

Now, let me tell you about a friend of mine who knew the value of meeting people without judgment. His name is Jesus. Yes, there is such a thing as Christian Anarchism and some people practice this. Midnight Cowgirl is one account from the source and free from politicians, pimps or hypocritical priests. It is not a zine about a sex worker who needs “saving” - it is about someone who deserves control of their own life, to think for themselves and to make their own decisions.

Let’s be clear: sex work is work. All workers deserve their rights and those rights are ultimately human rights. Sex work is historically, and today still, one of the most steadily in-demand yet dangerous and marginalised lines of work. This is true the world over and to a somewhat lesser extent in New Zealand.

New Zealand is considered a world leader for recognising that sex workers deserve the same labour protections as any other worker as a result of the Prostitution Reform in 2003. These protections include protection from sexual harassment, which constitutes abuse and any attempts to control sex workers. This was highlighted in a recent Human Rights Review Tribunal decision, which awarded $25,000 to a young woman when to quote the decision: “Over a three-month period, the older man belittled and frightened the 22-year-old woman until she felt unsafe and on edge, became depressed and turned to alcohol. His overtures included telling her he could do what he liked with the girls who worked for him, and threatening to take her out of her comfort zone.”

Midnight Cowgirl emphatically argues for the solution to justice in the sex-sector that was given then, and is still given now: that it can be achieved through collective support and solidarity, with organisations such as the New Zealand Prostitutes Collective.

Zines of the week are chosen by volunteers at Blackstar Books, Dunedin’s own anarchist-inspired community library and social space since 2003, located on Moray Place near the Octagon. Come by sometime – details and directions are available at cargocollective.com/zinefest
This article first appeared in Issue 8, 2014.
Posted 4:31pm Sunday 13th April 2014 by Jacobin.