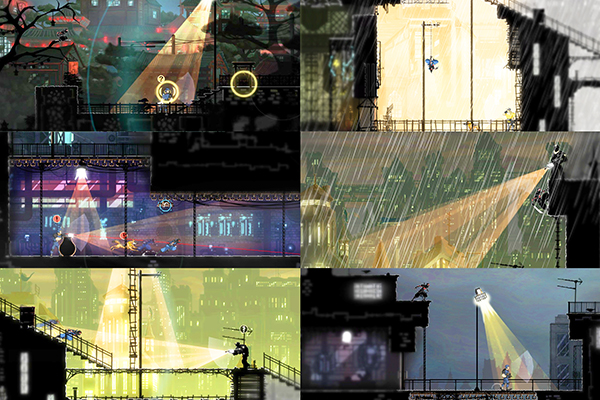 Mark of the Ninja - REVIEW

"Other” ninja games, and developer Klei Entertainment refuses to name names, are very un-ninja-like. Why spend all that time shrouding yourself in stifling, shadowy rags if you are going to blunder into the middle of a swathe of foes and paint the walls in their bright red blood just to show, unmistakably, that you’ve been there? Mark of the Ninja takes the idea of the feudal Japanese assassin back to its roots: silence is paramount, blackness is comforting, and dogs are the worst thanks to their acute sense of smell.

3D stealth games are problematic. How many times has a player been caught, not due to recklessness or bad timing, but because they didn’t quite know the exact, arbitrary route that an AI guard might be taking at that moment? A perfect plan is executed perfectly only to be screwed over right at the end by a meat-bag stumbling around a corner. In 2D games this isn’t as much of a problem, because the whole screen is visible at once. The angle of swinging beams of light, the direction that guards are looking, even the noise-circumference of birds that you scare and the “smell-range” of animals – it’s all laid out for you.

Mark of the Ninja has terrific visual design. When you are clouded in shadow, properly “hidden”, the detail of your ninja’s black jim-jams fades away. There’s no need to keep track of noise meters or illumination icons; it’s all there, integrated into the art-style, right before your eyes. The game has simple, cartoony art punctuated by violent death animations. It is subtle and stylish. The way your character darts, slinks, and clambers up walls is quite pleasing to the eye. Aesthetically, the level design does a great job of showing the climbing texture of walls. You always know which ones can be vertically traversed, and which ceilings can be swung from.

Stealth mechanics are as complex and refined as they would be in a fully-fledged console game. Your observant foes have a couple of levels of alertness. If they glimpse your shadow darting through a brief moment of light they will investigate, but they certainly won’t raise an alarm. It could have just been their over-active imagination. Bodies can be dumeds in vents, they make a satisfying squelching noise when they do, and you gain a handful of points for being so careful. Birds can be preemptively taken out with darts, and ratcheting noisemakers can be used to momentarily distract guards. Be careful though, you have a limited number.

Progress through a level is thoroughly score-based. You can, technically, engage in combat with guards after they’ve seen you, but you feel profoundly stupid if you have to. The way the ninja spins and darts loudly through the air punching and kicking looks elaborate, but is so much less elegant than a stealth takedown. And it nets you fewer points. Mark of the Ninja has light RPG mechanics. I say light, but completing a level well can often grant you skills and items that are extremely useful, such as the ability to pull foes to their doom from a vent beneath their feet. The power you gain from doing so is the best possible incentive to go back and complete an earlier level.

Mark of the Ninja is, in many ways, the ultimate stealth game. It’s all about timing and skill, slipping in and out of the shadows expertly in a way that leaves nothing to chance. There are many paths through levels, and they can be completed as clumsily or as expertly as the player wishes.