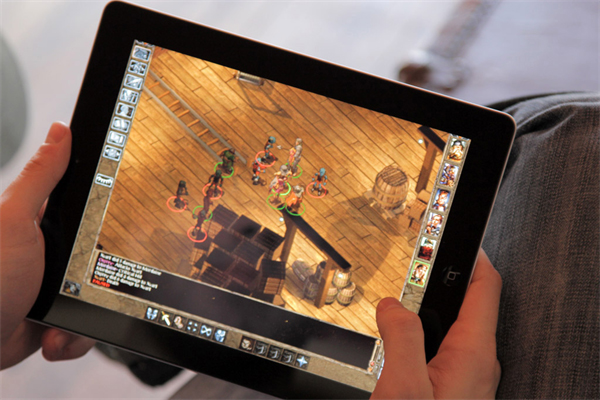 Baldur’s Gate: Enhanced Edition is a satisfactorily vague title for a massive overhaul. It’s an obvious attempt to smooth out all the lumpy bumps between the two games and two expansions that are the project’s constituent parts. Re-jigging developers Overhaul Games are marrying the free-roaming wilderness areas from the original game with the vibrant creativity and dramatic interactions of incredibly likable characters from its sequel. Even on the game’s official website, very few mentions are made of where the vast number of alterations and enhancements will be found in the context of the saga. This is an edition of the 12-year-old saga of games that aims to be as smooth as the iPad screens that will be running it in September.

A Nineties audience more used to The Fresh Prince of Bel-Air must have appreciated the first Baldur’s Gate, which made the rigmarole of Advanced Dungeons and Dragons die-rolls and character development accessible to a contemporary audience. The game world is a mosaic of wilderness areas, which must be traversed to reach a civilised area. There is a sense of discovery, the kind that games like Skyrim are entirely made up of, that comes from striding off the beaten path and finding a happy fisherman or an angry giant bug.

The second game is remarkable for artistic reasons. Playing modern blockbuster RPGs, think Skyrim, tends to be associated with a wealth of recycled assets. For instance, a quest might begin: “Oh my, I’m being embezzled by thieves, you’d better go retrieve my anti-embezzlement goat-horn from a barrow full of draugr.” Or: “ My word, I’m deeply in love with the goat herder’s daughter. Could you go retrieve my goat-horn-of-love from a rickety barrow full of draugr?” It’s understandable – in these fully realised 3D worlds, a single unique room is incredibly resource intensive. In Baldur’s Gate II, creating a new room was an afternoon’s work. The 2D levels are all hand-painted. The entirety of all four games is effectively one gigantic, richly detailed canvas. Every stroke of every brush is evocative. It’s an economical way to design a game, because your imagination does all of the work — rendering each speck of dust on a tavern’s bench top and every shadow cast by an iridescent crystal — so the game’s engine doesn’t need to.

Each of Baldur’s Gate II’s enormous dungeons is unique and fully realised. The prison that opens the game is, superficially, very typical – it’s an actual dungeon after all, fully decked out with rusty shackles and icy cobble. But after exploring it further, melancholy subtleties start to emerge. Beautiful rooms reveal an element of the antagonist’s character. The whole game is integrated – it’s not just combat sections partitioned away from storytelling bits by a shadowy entrance to a cave. Puzzles are there for a narrative or character-building reason.

At least three new characters are being added with their accompanying quest lines (12 hours of content at least), as well as original quest lines and over 400 small modifications to tighten up the interface and the combat.
This article first appeared in Issue 21, 2012.
Posted 4:26pm Sunday 19th August 2012 by Toby Hills.