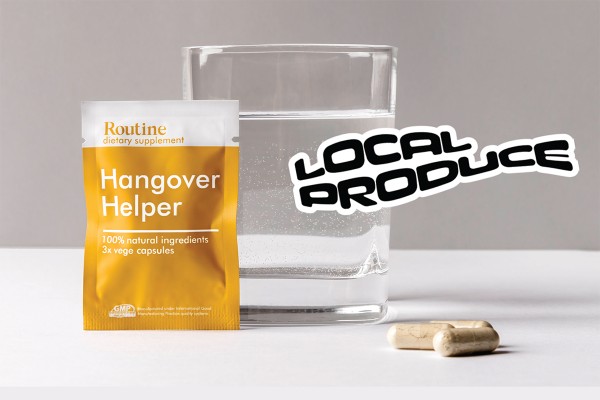 Karen and Ben are the minds behind Hangover Helper, a capsule-based hangover cure and business. Fittingly, the duo met on the rinse, one fateful night way back in their first year. Following their graduation last year, they combined their powers, Karen’s Commerce studies and Ben’s Health Sciences, to produce Hangover Helper. As big fans of taking substances in capsule form, Critic had some caps and talked to the pair to find out more.

It was in their third year of dusty Sundays that Ben began seeking out a hangover cure. “Everyone’s like ‘oh yes, it’s just dehydration. Just drink more water, drink more Powerade.’ So I tried, and I still got hungover, like really badly.”  Forsaken by Powerade, the chivalrous first line of defence, Ben turned to the wise oracle that is Shark Tank, learning that hangover pills were popular in the U.S. market. Initially sceptical, Ben used the academic journal access granted to us through the university to discern and back the best ingredients to include in their hangover cure. After months of deliberating, Ben and Karen took the first major step for their business: investing, manufacturing and then testing samples once they had wrapped up at Uni.

The ingredients of Hangover Helper are all backed by academic research and rigorous testing (i.e., a lot of drinking) conducted by Karen, Ben and their mates, in alleviating hangover symptoms. The secret formula is Japan raisin tree extract, ginseng and ginger all squished into a capsule. Though there is a small range of other hangover pills available here, their exclusive use of ingredients that alleviate hangovers (no other additives) is what sets them apart from other companies, said Karen. “We only put the active ingredients in and we put the highest concentration you can get…just to give you more of the active product.”

Right now, the biggest goal for Hangover Helper is getting word out that students no longer need suffer another excruciating hangover. “[We want to] let people know that they’ve got that option, if they don’t want to feel so dusty the next day” said Karen. Ben said “if we can help people not be so hungover, that’ll be ideal.” Humble words, spoken like true heroes. They would also like to get Hangover Helper available on the shelves of Leith Liquor and, humbly, Leith Liquor only. “We just want Leith because we’re from Dunedin and that was our go-to liquor store. Just [for it] to be there would be a dream come true.” The duo have approached Leith and are currently waiting on a reply.

The big question is: does Hangover Helper work? To find out, this author got inappropriately drunk at a Tuesday night quiz to find out. After proving that our team was indeed no-brain-head-empty by coming in last place, the next day I got up early and was amazed to find myself starting my day by tackling the most admin of all tasks…answering emails. So, yes, Hangover Helper does indeed have this writer’s approval. You can purchase Hangover Helper at their website here.