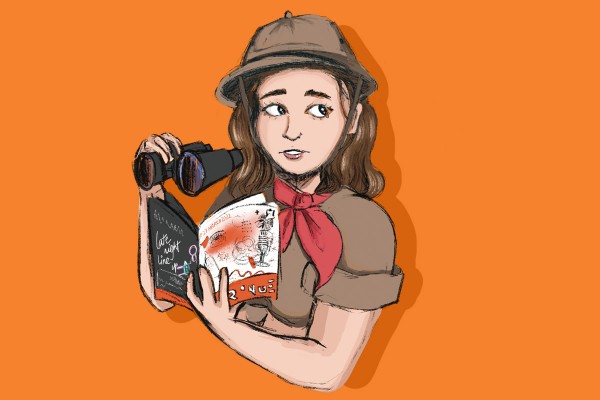 Infringing on the Fringe Festival

How many fringes were there, really?

The Dunedin Fringe Festival, as the website states, aims to “bring experimental contemporary art to a wider audience and to support the work of emerging artists”. The line-up saw big names in comedy like 7 Day’s Ben Hurley and Billy T nominee Jack Ansett come to entertain the masses of Dunedin. I didn’t see either of those acts, but I did go on a Fringe-binge for a good five days and rated what I saw based on how many fringes and fringe-related content I could find – as well as a drink to pair it with. I figured it was unfair to rank art exhibits based on personal taste, so this completely arbitrary metric will have to do. If you didn’t get the chance to see any acts or exhibits this year, don’t worry, Fringe is annual and you’ll have a chance to enjoy it this time next year.

5 Lesbians Eating a Quiche tells the story of the Susan B. Anthony Society for the Ladies of Gertrude Stein. The setting was their annual quiche breakfast, over which the ladies discussed the urgent issues plaguing 1956, such as oncoming fear of nuclear war breaking out. History really is a circle, isn’t it? The Ladies of Gertrude Stein are as obsessed with eggs as a grandchild-craving mum, and the play circled around these women and their relationships (both interpersonal and with society), and the roles they are expected to play as ‘widows’, which is definitely the reason these ladies are unmarried.

It was a hilarious story of repression, discoveries, and, of course, sexual innuendos till the cows come home. Fitting with the Fringe festival, the main cast was sporting a good number of ‘50s style fringes, and the audience pulled through as well, with it being harder to find someone lacking a fringe than it was to find someone rocking one.

Speaking of the audience, there was a bit of audience interaction. If the thought of public performance sends you into anaphylactic shock, back row seats are recommended. After the applause, the director revealed 5 Lesbians Eating a Quiche will return later on in the year at a currently unknown location, so if you missed out on the Fringe edition, fear not! You’ll have another chance to see these lesbians eat their eggs.

8/10 fringes present
Best drink to pair: An egg white cocktail of your choice

3/10 fringes present
Best drink to pair: The basic but reliable gin and tonic

If your worst nightmare is audience interaction, then this isn’t the show for you. But baby, if you’re a loud, slutty, debauched alcoholic, then this is your calling. And you know what? If you’re bringing old, white, golfer energy then this show would probably apall, shock, and stun you into a stroke regardless. As the host of the evening, Feather Unsure, explained, Renegades are the end to a traditional circus festival. They are often a time of heckling and debauchery, a place for performers to try out new material. Feather Unsure took over hosting for the Wednesday show, and not only provided hilarious jokes, but also brought one heck of a fringe. A majority of the performers also carried on fringe content, with only about three not having some form of fringe. A shit-ton of homegrown talent alongside performers all the way down from Welly were onstage to display some of the best quads, burlesque, and circus tricks you’ll see this side of the Octagon.

9/10 fringes present
Best drink to pair: Absinthe for the brave, a $5 shooter for the cowards

A comedy duo playing off the “comedic chasm that separates Gen Z and Millennials”, the stage presence of Age Gap was notably fringeless. The audience was rather spartan on fringe hairstyles as well, yet incredibly rich in buzzed rugby-boy hair. Not a fringe to be seen. Despite the lack of fringes available to gawk at, the show itself was worth the $7 I dug out of my couch cushion. It consisted mainly of jokes about the differences between making it through puberty in the 2000s vs the ’90s, the differences between Canada and New Zealand, and several riffs about the failing marriage of one of the comedian’s parents – all while said parents were seated directly behind us in the audience. This definitely added a certain je ne sais quoi to the show, and felt a bit like pissing on the third rail. I’m so sorry about your husband not liking your painting, ma’am, that would have driven me to the brink as well. Divorce exists for a reason.

1/10 fringes present
Best drink to pair: Anything to make you forget about your relationship, I guess

The Otago Art Society, tucked away in the Railway Station, was the last stop on this five-day Fringe bonanza. But what a heavy hitter it was. Truly a hidden gem. With several very Instagram-able pink walls, the exhibit being emptier than an optional lecture on a Friday morning, and the multiple crafting activities available, the Art Society should be proud of this Pink! experience. The exhibit itself featured curated art, some of which was for sale, but all of which was centred around the colour pink. A personal favourite was the second-place pink piece, a mixed media yarn project titled “A Warm Heart.”
Although there were one or two pieces that had a fringe texture, on the whole fringes were lacking. However, the crown jewel was the pink crafts table that facilitated regression back to youthful innocence, allowing for a couple of peaceful hours making random art projects and forgetting about anything outside of this blissful pink bubble. “A Requiem for a Wine” was the mixed materials art project we walked out with, inspired by wine corks and a desire to drink.