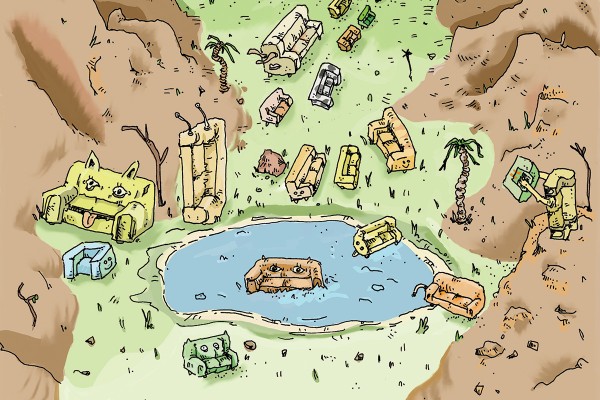 Outdoor couches are an endangered native species, unique to the flora, fauna and furniture of Ōtepoti Dunedin. Made of cheap, decaying foam and ugly fabric, outdoor couches can be found proudly perching on porches and backyards throughout North Dunedin, despite being better suited to your nan’s living room or maybe a counsellor’s office.

As they're endemic to Dunedin, other regions instead are populated by a strange creature known as “patio furniture” that’s actually made to go outside so it won’t go fucking rank. This creature outcompetes the outdoor couch and forces it to take shelter inside human homes. Unfortunately, due to people getting their shit together, the outdoor couch population is slowly in decline which may have devastating effects on the student ecosystem. Without a stable outdoor couch population, there would be nowhere to sit when cooling down from a humid party or escaping the DnB, and nothing to awkwardly lean on when your friend is having a super long smoko.

Several species of outdoor couch have been identified, with more yet to be discovered. The amount of subspecies out there is probably in the dozens – you can chuck almost anything in your yard (dining chairs, milk crates, beanbags) and forget about it for six months for a similarly musty effect.

Couchus couchus: The Classic Couch
Kinda comfy but always slightly wet no matter the weather, the classic outdoor couch comes exclusively in desaturated colours and oddly textured fabrics, usually worn through to expose the crumbling sponge interior. Is that a bobble pattern or just tons of lint? Was it always this fuzzy or is something growing on it? Could it have a symbiotic relationship with the soft furnishing equivalent of black mould? We all know the answers, but luckily no one sits on them sober.

Couchus pseudobovia: The Pleather Couch
Guaranteed to be well-worn and cracking, the best part about fake leather couches is being able to peel little bits off of it when no one’s looking and then pretend it was always like that. If it's a hot day, the pleather couch will stick to your body in an effort to consume you, or at least make sure you can't stand back up without an embarrassing squelch that leaves a pool of sweat to rival the Leith in your wake. As an apex predator, many young breathas are claimed by pleather couches every year.

Couchus arcanum: The Antique Couch
It might have been a pride of the fireplace once, but now it’s covered in ciggie burns and kinda smells like piss. The antique outdoor couch is an antique in the name alone (although it may have some very “vintage” stains) and struggles to adapt to its environment. Identifiable due to its floral or worn-down velvet exterior, the antique outdoor couch may also be observed in its seasonal plumage of crochet blankets and throw pillows, which is usually a half-arsed attempt to hide something truly heinous. Best not to think about it, really.

Couchus apocolyptus: The Fucking Hell Man, Sort Your Shit Couch
A tangible red flag if there ever was one, this specimen is widely hunted for its burnability. Luckily, anyone who owns one is also the sort of person who’s 100% down for a couch burning at a moment's notice. Tattered to the point you may actually fall through it, this duct tape and dried vom monstrosity is an opportunistic feeder, taking whatever it can get, whenever it can get it. Again, same goes for the Breatherus dunnersi that cohabitate with it. Populations of C. apocolyptus were hunted nearly to extinction in the early 2000s, but recent mandates have preserved what stragglers remain.

There are many steps you can take to conserve our precious outdoor couches and the Breatherus dunnersi that depend on them for survival. Avoid purchasing benches, deck chairs, or waterproof outdoor furniture of any kind that would be protected from the elements. Instead, opt for taking in stray sofas and neglecting them to the point where they lose all chance of being allowed indoors without a tarp underneath, several spurts of Raid, and some antifungal thrush cream on standby. Finally, always make sure to feed your outdoor couch a well-rounded diet of pizza crumbs, old receipts, and ciggie bums to ensure it lives a long but non flame-retardant life.