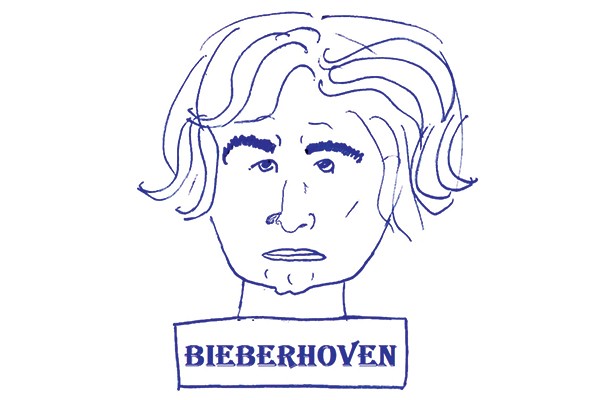 “Music is a higher revelation than all wisdom and philosophy.”
- Ludwig van Beethoven

Music is one of the many languages of the human soul, but, as Herr Beethoven points out, its profundity is surely of the highest order. This week I have been in contact with a local musical genius who has great insight into this, the most mysterious of all the verses of the heart. He wishes to remain anonymous, but I can reveal he hails from the honourable and stately suburb of Opoho...

“Classical music is bullshit. ‘Oh yeah, I love to sit in the dark for three hours and listen to flutes and hold my farts in, durrr,’ get out of here. Don’t get me wrong though, the old-school composers were like the first beat makers, and should be respected as such. Even some of those violin parts sound like some good synth loops sometimes, but the bass never fuckin’ drops!

Let me tell you a story... One day, the Auckland Symphony orchestra was having one of their usual rehearsals. Their piece – none other than the splendid 2nd Symphony by Rachmaninov. While the conductor was briefing the ensemble on the day’s proceedings, a hooded figure entered the hall and sat in a seat towards the back. The orchestra thought nothing of this, as people would often come to see them practise. After several hours of repetitive rehearsals, the conductor was still not satisfied with his orchestra. He finally broke, ‘Ah! What is wrong?! We are missing something, what is it, who can tell me?!’ But the orchestra remained silent, forlorn, and timid. Then a voice piped up from the back of the room – it was the hooded figure! ‘Your percussion section is much too forte when they should be mezzo-forte. They sound like two portly men falling down a flight of stairs, whereas they should sound like the hearty knock against an oaken cask of wine that was vinted in the holy land. Right now they are like a Family FeastTM, whereas they should only be like a Zinger BurgerTM large combo.’ The conductor was taken aback, and stared at his sheet music with a pathetic frown, deep in professorial thought. Suddenly he erupted, ‘Ah! You are correct! You are a genius!’ and the hooded figure removed their hood, revealing a young woman. The year was 2012, and that young woman was Lorde.

Lorde, Justin Bieber, Harry Styles, you name them – if they’re big in the music scene today, I believe they are a genius, and I mean an actual genius. Bieber likely mastered the works of Mozart at the age of nine, and performed for the families of Russian oligarchs. Harry Styles was probably the official court minstrel for the House of Saud in Saudi Arabia. I would not be surprised if these facts were buried by EMI, etc. when they first broke into the mainstream. The only reason Bieber, Styles and Lorde don’t play Bach concertos etc. on multiple instruments is because it’s too easy for them! It’s just not interesting! They abandoned that dusty old classical stuff in favour of a newer, more complex art. People will be rehearsing Bieber in 300 years’ time, I’m certain of it.

I too am a musician. I have decided to dedicate my life to my favourite genre: K-pop. I want to be a K-pop idol really bad. I have been trying to learn Korean, but it’s hard. I have dedicated many months of my life towards this dream and I’ve learned some basic phrases like ‘where is the toilet?’ and others, but it’s an uphill battle. I’m an okay dancer too; my uncle said I had good moves after we went to this neighbourhood party where I accidently knocked down the fold-out table with all the pizzas and OJ on it while I was moonwalking – someone put it too close to my ass. I saw this documentary on TV though, where these Korean kids were practising dancing and singing for like ten hours a day! I am very old by K-pop standards and they are already ahead of me! They can speak Korean naturally because they are Korean and it’s not fair! I wish I was a ten-year-old Korean boy, and it’s not fucking fair.”