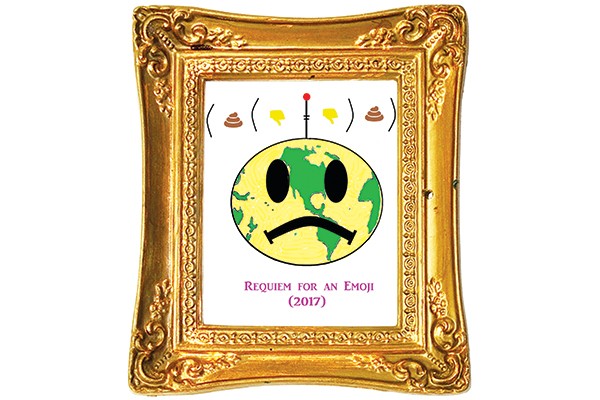 “The purpose of art is washing the dust of daily life off our souls.”

Art is... mysterious. Is it the physical embodiment of the human soul? Is it the pale reflection of a world we can never reach? Will the subtle genius of my Care Bears-themed erotic pottery be appreciated within my lifetime? As I have learned this week, the answer to all of these questions is a resounding ‘probably’. This week I’ve been in contact with a local artist, who has helped me firm up my understanding of art and how to make it in the art world. He wishes to remain anonymous, but I can reveal he resides in the cultured and refined hub of Downtown Dunedin.

“Getting your big break in the art world is a hard nut to crack, believe me. I’ll share some of what I’ve learned on my journey thus far. First off, you need to find your tribe; connect with other arty folk in your scene. Things as simple as clothing can help signal to other arty folk which art movement you belong to. Take me for example – I used to be a devotee of Andres Serrano, and was particularly moved by his 1987 piece ‘Piss Christ’ (which, for the philistines out there who don’t know, is a tastefully lit photo of a plastic Jesus in a jar of Andres’ pee). I used to frequent the galleries wearing what became known as my ‘Piss Poncho’ in a vain attempt to get into that art circle. But that was when I was young and foolish. I now consider the works of Serrano to be quite uncouth, and think pee belongs in the toilet only.

The saying ‘starving artist’ exists for a reason. When you’re not creating, you’ve got to find a way to make some dough. What better way than as a nude model for a figure drawing class? I have done this in the past for a very exclusive client, and it felt great to help out a fellow artist! It was a bit strange at first, as it was only a class of one. And he never draw a single thing the whole time I was there, either – he just sort of just sat there staring and shifting around in his chair a little, touching his beard while going ‘hmm, hmm, yes I see’. He must have a very advanced process.

Another way of getting a name for yourself is to help out at the local art galleries, explaining some of the more complex works to the visitors. You could call it your ‘art gallery job,’ but you wouldn’t technically be employed there, and you wouldn’t need to tell the manager either – because what’s the harm in just helping out? You’ve really got to know your stuff though. Here’s a tip: when you’re explaining an art piece to a visitor, just use some basic colour theory. You could say some things like this:

‘This new piece, a soiled pair of underwear draped on a trash bin, represents how Capitalism makes us all disposable.’

‘ – No, that’s just some undies in the bin – the exhibition opening got a little wild last night.’

‘Really? Are you sure? Or are you just in denial about Capitalism’s death grip on us all?’

Most great artists share a lot of their ideas. Take Renoir and Monet, for example... Andy Warhol and Jean-Michele Basquiat... And now I will share one of my project ideas with you, my fellow artists. It’s an extremely good art idea, and I have no problem sharing it because I’m sure some of you will repay me one day (with your good ideas). The working title is ‘Requiem for an Emoji,’ and it’s a statement about Fake News. It features a sobering image of the planet Earth from a distance, the landmasses and oceans all visible. Overlaying the entire planet is an adaptation of Harvey Ball’s timeless yellow smiley face – but the happiness of the face has been subverted, and now depicts a pathetic frown. It also resembles a ‘sad’ emoji for those of you who, like me, are huge pieces of shit (millennials). Requiem for an Emoji illustrates how the people of Earth are collectively unhappy about the rise of Fake News. Now, take this fire, fellow artist, and carry it towards Truth.”