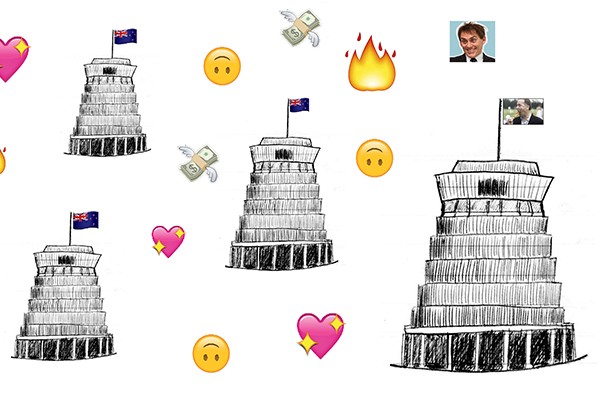 “Be prepared, there is a small chance that our horrendous leadership could unknowingly lead us into World War III.”
- Donald J. Trump, @realDonaldTrump

It’s that time again, folks. That magical time every three years when we get to exercise our democratic rights, and I don’t mean squats, baby (exercise joke quota is now filled. I am sorry). It’s politics season, so this week I’ve been in contact with a political scientist and learned what we need to know about politics and the upcoming election. He wishes to be known as “Dorin Cann,” which is a slight alteration of his real name, but different enough so no one will know who it actually is. His secret is safe with me.

Now, because we have an election coming up, I’m going to share some tips on how to be a good citizen during this time. Tip #1: Become personally invested in a political party to an extreme degree. This is what politics is for. If they win, you win. If they win, they’ve shown they are better than everyone else and have the right opinions on every issue. Therefore, you do as well. You are a better person. If, however, your chosen party loses, then it is a personal failing on your part. They have failed, and thus you have failed. You also had terrible opinions on all of the issues this entire time. It took a stunning defeat to see this fact, and it could have gone either way there for a while, but it’s all out in the open now. You are now a lesser person. I would encourage everyone to attach at least most of their self-worth to the success/failure of a political party. It’s what politics is all about. It’s fun.

Tip #2: Politicians are inherently smarter and better people than us. They are all-around just better, and I have no problem admitting this. This is why they are in charge. This is why they are allowed to tell me what to do. Because I know that to them, I am a pathetic worm, allowed to be kept alive only to amuse them with my inferior brain. I know for a fact they read all of my emails and job applications and laugh at me for being so miserably inadequate. I know they are holding my internet history to ransom. I know I deserve this. I know we all deserve this. Never disagree with those in power, ever. They could easily lock all of us up forever – remember that. They are the most supreme people ever to have lived, and we are lucky to breathe the same air as them. Whoever wins this election will have my fear, the same fear I reserve for death and God.

Tip #3: The middle ground is always right. If 20-odd years of watching South Park – the extremely good and insightful cartoon – has taught me anything, it’s that having strong opinions one way or the other is very uncool. Always take the middle position. If one person wants to burn down every Burger King because they oppose a burger monarchy, but everyone else wants to keep the Burger Kings intact, then the correct stance is to help burn down exactly half of all Burger Kings. Anything else would be partisan and divisive. ‘You don’t want to burn down half of all Burger Kings? Woah, there! That’s an awfully strong opinion! Get a load of this one! They have feelings about things! What a baby!’ they will say.

Tip #4: If all else fails, just be on the winning team. Politics is a team sport that anyone can play at any time. If after the election you want to feel like a winner, just join the winning team and say you were on that team all along. ‘Me? Oh yes, I’ve always liked this party. They won and therefore I won. I am a winner. I am emotionally stable,’ you might say.”