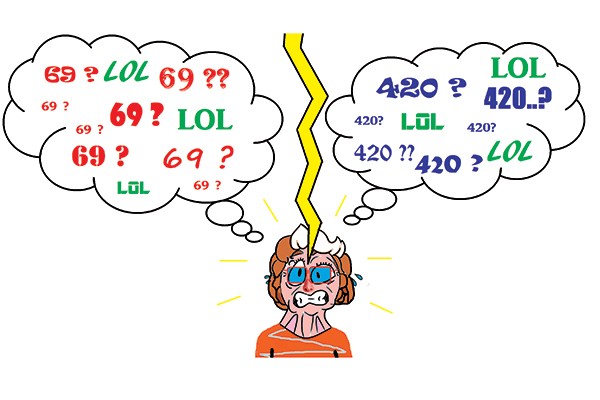 “Numbers are the highest degree of knowledge. They are knowledge themselves.”

This question comes from a loyal reader: “I'm at a quandary: which is the funnier number, 420 or 69?” Thanks for another great question. 69 and 420 are the funny numbers. These numbers exist, like glitches in the matrix, to make us break out in big dumb smiles and knowing nods whenever we encounter them in the wild: “Ah! Yes... 69 (lol). It is the Good Number. The Sex number. I understand perfectly.” This week I’ve been in touch with an amateur mathematician who’ll help us understand these fascinating numbers. He currently resides in Port Chalmers and wishes to remain anonymous.

“69 and 420 are my favourite numbers. There aren’t many numbers that have their own subculture and lore, but the ones that do are pretty neat. Take e, pi, i, 0, 1, 69, and 420. Any mathematician will tell you these are the most important numbers ever discovered. But only the last two are funny. For those of you who don’t know, 69 is the sex number. It is the sex number because it looks like two people putting their mouths on each other’s vaginas and/or ding-a-lings (penis and balls). When you see the number 69 you say ‘lol’ because it is the sex number: the number of sex. 420, on the other hand, is the weed number. It is the time of day (4:20) when people like to smoke weed, furthering society’s descent into degradation. When you see the number 420 you say ‘lol’ again, because it is the weed number. As we can see, both of these numbers are pretty funny and neat. But my goal here is to help you decide which is funnier.

On one hand, 69 is undoubtedly the most efficient joke in history – just two digits, drawing hours of laughs. It’s a joke we’re all in on. But 69’s less exciting relatives are hardly ever talked about. 96, for example, is the opposite of 69. 96 represents an embittered couple who can no longer face one another when sharing a bed, having to top and tail like sardines (maybe one of them just has bad breath, I don’t know). 66 and 99 offer no excitement whatsoever. They both represent one person getting a face full of the other’s too-long hair when they are lying down, spooning. Ugh. Terrible. I wish you’d at least use a hypo-allergenic shampoo, I think I’m getting another rash. My face hurts.

69 is also pretty rude, limiting the family appeal. How is someone supposed to explain to a kid why all the adults started laughing when the man at the bus stop said ‘route 69, haha’?

420, on the other hand, is more accessible: ‘It’s a time when people smoke weed,’ is a very inoffensive and simple explanation. Fun for the whole family. Some people are offended by drugs, but if we’re being honest here – weed has very few downsides and is basically a children’s drug at this point. The number 420 is, at worst, PGR. A whole 420 culture has arisen from the versatility of the number. Yelling ‘blaze!’ whenever 420 appears on a video game score, in a phone number, anywhere... 420 merchandise; t-shirts, hats, wallets – all proof of the funniness of the number.

I suppose the final answer as to which number is funnier comes down to what kind of person you are. What do your friends find funny? How rude do you like to be? Are you the kind of person to set up an automatic message to your pals saying ‘Blaze it breh,’ at 4:19 am? Are you prepared to explain to your granddad why turning 69 is so funny? Because that would definitely be hilarious. As for me, I feel this short poem I’ve written best explains my position. Happy counting, friends.