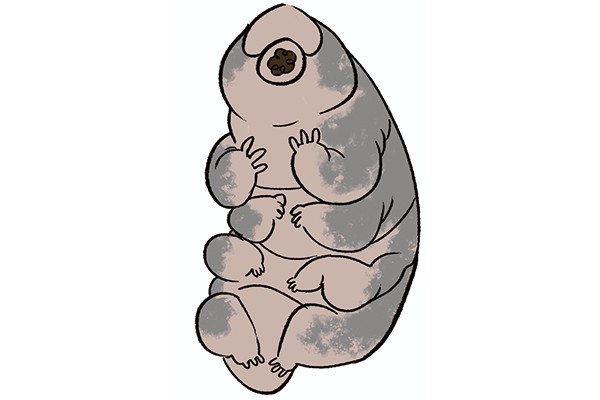 For the last 500 million years, the micro-animal Hypsibius dujardini, otherwise known as tardigrades, have ruled our planet. If you’ve never even heard of these bad boys, then boy howdy it’s time to learn you.

Measuring up to a whopping 1mm in length, their curious little three pronged hands look like miniature garden cultivators, whilst their bodies resemble little obese caterpillars made from vacuum cleaner bags. It’s no surprise that they are also adorably referred to as “water bears” and “moss piglets.”

Tardigrades are the only creature to have survived all five of Earth’s mass extinction events, from the Cambrian to the present. Why? Because they are extremotolerant, meaning they can survive in incredibly extreme conditions that are too hostile for other lifeforms - such as the atmospheric pressure of the bottom of the ocean, places with high doses of radiation, and even the goddamn vacuum of space.

Included in their arsenal of trickery is the ability to master cryptobiosis (which translates to “hidden life”), a form of suspended life whereby a creature can remain alive even whilst appearing to be dead. When shit gets real, tardigrades just dry up into little husks (called a “tun” state) and shut right down until their environment is more palatable, dropping their metabolisms down to 0.01% their usual rate.

Another incredible way tardigrades are able to survive radiation and space is a tardigrade-specific protein called Dsup, which binds itself to DNA and becomes a shield against X-ray radiation, allowing the DNA to remain intact when exposed to radiation. Even more exciting is that this protein could totally be transferred to cells of other organisms - like humans. Tests using human cells showed Dsup to reduce X-ray damage to human DNA by 40 percent, meaning that when we go up to colonise Mars, this could be a very real asset to our ability to survive up there (and in other parts of space).

When tardigrades are confronted with a dry environment, they just casually turn into glass for a few years to weather the storm.Their tardigrade-specific intrinsically disordered proteins (TDPs), which are usually in a jelly state, turn the cytoplasmic fluid of their cells into a kind of glass, completely protecting all their sensitive areas and proteins and removing the risk of their proteins and molecules breaking or deteriorating.

On top of this, they use their own glycerol as an anti-freeze agent, which is probably why last year a tardigrade that had been completely frozen for over thirty years was revived by scientists, and was subsequently able to reproduce as normal. These little guys could potentially tell us so much about extraterrestrial life as we encounter it in the future, and they could also help us further our own biological and genetic advances.

I, for one, welcome our tardigrade overlords.