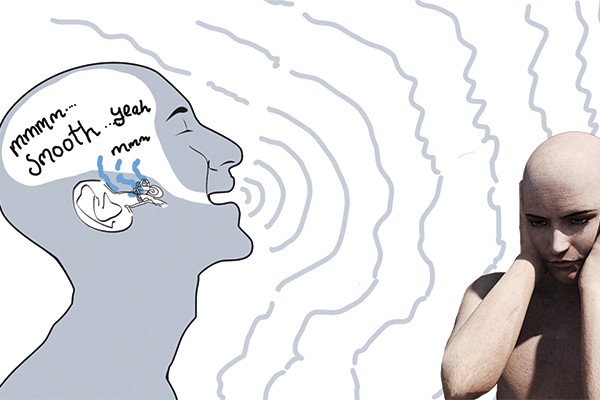 As someone who hosts a weekly radio show, I was initially excited at the prospect of hearing my own voice in recording. I thought I was a pretty amazing radio presenter and that I sounded like milk, honey and cocaine all in one. Boy, how jarring it was to hear my screechy bagpipe of a wheeze emanating from my headphones that first time. Surely this wasn’t MY voice!? I didn’t sound like that, did I? I always thought I sounded cool, like the love child of Iggy Pop and that guy who does the yelling in the ads about the frenzied persian rug warehouse sale (the one that ends at midnight tonight).

But hark! The ‘cool radio voice’ that I treasured dearly was actually all in my head. Literally!

Our ears are weird little labyrinths full of wrong turns, ex boyfriends and bad decisions. We have different parts of our ears that do different things. Our outer ear is the part that catches all the sounds from outside your own body, whereas the inner ear processes and transmits the vibrations from inside our body, like swallowing or speaking.

When you are hearing things from an external source, like listening to another person speak or listening to some music, the sound waves from that source are created as pressure waves and are transmitted through the air to reach our outer ears, transformed into an electric signal and passed to the brain, which is a process that we call ‘hearing’. This is all well and good, but when you hear your own voice, the soundwaves still reach your ears and cause the process above to take place, but what also happens is that as you are making the sounds with your mouth, your larynx muscles contract, sending vibrations through the neck and skull to the inner ear. This means that your brain now has two incoming things to deal with, which is where things start going wrong. Your brain combines the two ear functions, and believes that this is the actual sound of your voice. Because of the vibrational aspect, you perceive your voice to be lower than what it actually is, which is why we always think our voice seems high and stupid and gumby when we hear it in recordings, as opposed to the dulcet, seductive tones we hear as we speak.

The bottom line is that when we hear our voice in recordings, we hear it the way other people do, rather than the way that we hear it in our brain. That’s because it is not being confused with the vibrations from speaking at the same time, and this stark realisation has a direct correlation to immediate feelings of utter despair and self-loathing.