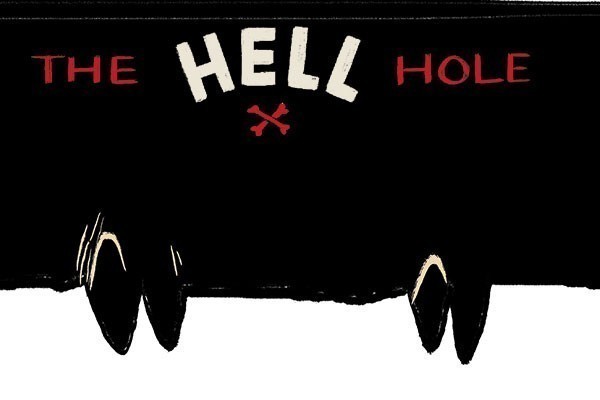 “Yeah, Accounting isn’t really what I want to do, but it’s a decent fall-back. I dunno, I guess I just wanna open myself up for opportunities, y’know… are you still paying attention, Tony?”

Oh shit, I missed half of that. Some bullshit about her degree. This chat is awful. Not blaming her obviously, it’s not like I’m giving much back. Shit, she’s going to think I’m boring. Talking about your degree is the last resort before conversation dries out into awkward silence. Oh, good, the waiter’s coming, that’ll change the subject.

The waiter put a plate of some seafood chowder thing in front of her. It looked like Vodka Cruiser vomit to me, but as long as she’s happy.

“Chicken Fettuccine Alfredo?” The waiter inquired of me as if I wasn’t the only other person at the table.

Cool, I’ve never had a waiter do this in real life. Feels very fancy. When do I know when ‘when’ is? And do I actually say ‘when’, or do I just say stop or something? Is the sentence structured to make ‘when’ the object or the adverb? It’s either an implied ending like “Just say when [you want me to stop]” or he’s literally giving me the code word that will stop him from grating parmesan, as if he can’t stop without my permission, like something out of Westworld.

Wait, was he grating that whole time? He’s really pounding through that block. It’s covering half the meal now. I should stop him. She’s looking at me. I haven’t been paying attention. Why do I keep doing this? She has already caught me once, if I admit I zoned out again she’s gonna think I don’t want to be here. I really do want to be here. If I look very thoughtfully at the cheese maybe it will look like I’m trying to work out exactly how much I need. There’s an awful lot there already, but hey, maybe I just love parmesan. Well, I do love parmesan, that part’s not even a lie.

I think some just spilled over the plate. Yep, that’s definitely on the table. What the hell do I do now? I can’t just tell the guy to stop and play it off like I intend to casually eat more cheese than a French Rugby Team. She’ll think I’m some cheese-obsessed freak. There’s a small mountain in front of me now. People are looking. The waiter’s still mindlessly chugging along, raining strips of dairy in front of me. How is he not out of cheese yet? That looks like a brand new block. Does he have backups hidden on his person? Maybe there are a couple KGs under his waistcoat, a bit more in his back pockets; perhaps even his shoes have some sort of inbuilt compartment.

I can’t see her any more; the pile of cheese has grown too high. I’m almost glad I don’t have to look her in the eyes. I’ve well any truly blown this. I expected my mediocre small talk and awkward demeanour to ruin this for me, not a parmesan reproduction of the Pyrenees.

It’s falling into my lap now. Some of it is in my shoes. The smell has overwhelmed the entire restaurant. If I punched my fist through it, I don’t think it would fall over. There’s too much structural integrity at this point.

A chunk rolls off the top, it gathers speed on its journey downward. It hits a small pile jutting off to the side, then that comes crashing down too. Soon there’s an outright avalanche of parmesan. The giant cheese slide cannons into me, the pure weight of it knocking me off me seat. I try to move, but the cheese has locked my legs in place. I try to call out, but it fills my mouth. It actually tastes pretty good. But the more I swallow, the more surrounds me. It’s in my nostrils, my ears, my hair. I don’t know if it’s my body heat or whether the pure volume of the cheese has created a pressure melting point, but it’s starting to go gooey. It’s everywhere. It’s… inside me. If this cheese were sentient this would be blatant. I throw my body from side to side, but my struggle is pointless. I hear nothing. I see nothing. The cheese has claimed me as its own. Someday someone will excavate this parmesan prison and find me. Or perhaps by that point I’ll be nothing more than mush, indistinguishable from the cheesy hellscape I now inhabit. Maybe I’ll go well with some tomato relish and a Cabernet Sauvignon.