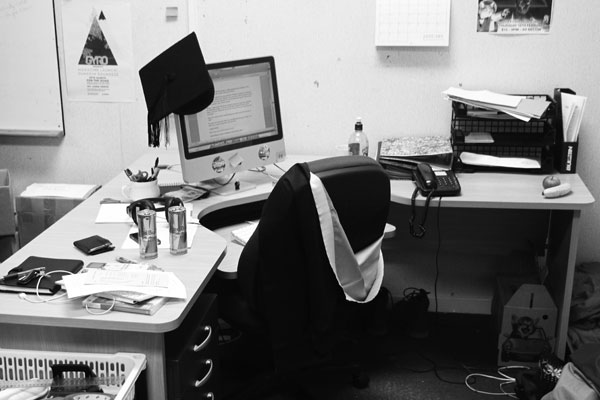 As you can (maybe) tell from the photo, I finally graduated on Saturday. It was a long and at times hard road, and it is pretty satisfying to be done. And while the actual graduation ceremony can drag a bit, the expensive alcohol and gourmet food afterwards made it all worthwhile.

Graduating usually marks the end of your time here at Otago. It is unusual for a graduate to either want or be able to stay in Dunedin. I have been lucky to have the chance to cap my time here with the a year at the helm of Critic, but chances are that this time next year I’ll be in greener, more northerly pastures. Though after watching Target last Tuesday, I fear I may have missed my calling to enter the fascinating world of carpet cleaning. I never get to masturbate in the office.
Which is a shame really. Dunedin has collapsed in the last ten years, from a legitimate city with serious industry, to a provincial town that is ridiculously lucky to have a massive University. Without the Uni, Dunedin would be lucky to be much more than Invercargill.

The City Council and the University are trying to get more graduates to stay in Dunedin, but it is fighting a losing battle. The pull for young qualified graduates to at least move to Wellington or Auckland, if not Melbourne, London, or increasingly Berlin, is all too often overwhelming.

So I think we should look on the bright side of this so-called “Brain Drain”. A substantial proportion of these young Kiwis return to NZ after their overseas experience, often because they view it as the best place to bring up their own children. They come back with more experience, more skills, and a wider understanding of the world. This is pool of talented, experienced workers is a huge asset to New Zealand, and one we should be thankful for.

This issue of Critic is loosely themed as the music issue. Our young (and not so young) musicians are some of those that see the amazing opportunities available overseas, and quickly take off to greener pastures. Critic Music Editor Lauren Wootton has written a great article this week on the challenges of breaking into the New Zealand music scene. In our other feature, Zane Pocock has written an article on the important cultural role of alternative radio in a vibrant and healthy society.

And though you’re probably not thinking about it yet (a few pesky assignments and exams to get out of the way I would imagine) the Re-Orientation line up just got announced: Ladyhawke is heading down to play her new album, and with support from Kora and Left or Right, it should be a great week.