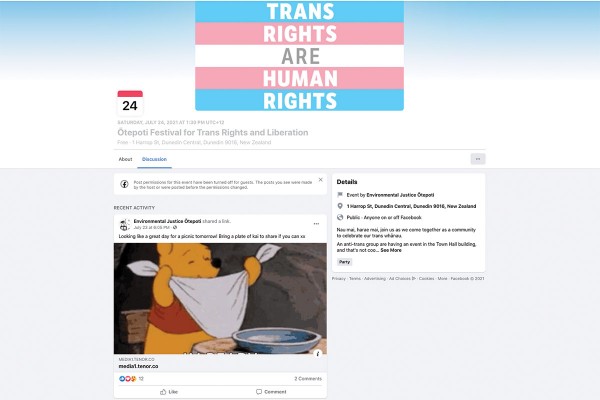 Not many people ‘Speak Up For Women’

The trans rights festival in protest of the Speak Up For Women (SUFW) meeting at the Dunedin Town Hall ended up dwarfing the original event, with around 350 attendees outside the Town Hall on Saturday 24 July. The Ōtepoti Festival for Trans Rights and Liberation, organised by Environmental Justice Ōtepoti, was a self-described “big ‘ol picnic party”.

Scout Barbour-Evans, speaking at the trans rights festival, said the protestors gathered “because this organisation [SUFW] has a longstanding history of fighting against transgender rights. Their talk today, ‘Say No to Self-ID’, that’s actively campaigning against our rights.”

The SUFW event was part of a campaign against a proposed law to allow trans and non-binary people to change their gender on their birth certificates more easily. Scout said that their campaign is “not going to change anything for women, it’s not going to make life any better for women, but it is going to make life a hell of a lot more dangerous for us and trans folk around the country.”

“We’re here, we stand here because we love our transgender whānau and our non-binary whanau, our intersex whānau, we’re here to show that outpouring of love,” they said. “I am so grateful for every single person here who came to show that love to our whānau.”

An attendee said that the event had a “wholesome solidarity vibe, with lots of dogs and cats and pets”. They said that when SUFW exited their meeting “it became very clear that there were not actually many of them, around 30 people in the meeting,” they estimated.

Ingrid Leary, Labour’s electorate MP for Taieri, attended the trans rights festival. “I’m representing Labour values, which are that trans rights are human rights,” she told Radio One. “It’s important as an electorate MP to be here and to stand in solidarity with our trans community. I agree that people inside are able to have their free speech, however the people gathered here are making a statement as well. It is 2021 and I thought the conversation would have moved on by now.”