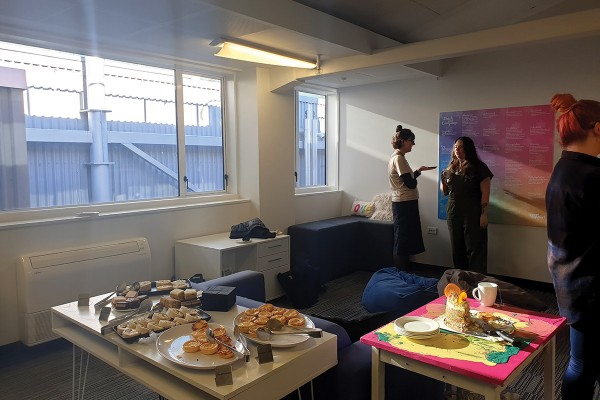 Once again we can say “yes homo”

The queer space officially opened on Friday 23 June, after a blessing. This was followed by a speech from OUSA President Michaela Waite-Harvey. The space is located on the second floor of the Union building, opposite the Terrace Lounge. It has a microwave, a mini-fridge covered with The Office stickers (which were added by the fridge’s previous owner and not the Exec), a chalkboard wall covering up some feature wall experimentation, and a couch.

“This has been a long time coming and I'm really happy that we're finally able to open this space,” Michaela said. “This space is for you to hang out, to have kai, to play games, to feel safe and secure in an area that is specifically for you.” She thanked the University for providing the space and other Exec members for helping her to fit it out.

Queer and questioning students who want to access the queer space can fill out an online form, which is monitored by Campus Watch, who approve access to the space. The process can take up to five days according to the form, but Michaela said it’s likely to be much faster in practice. After they are approved by Campus Watch, students can access the space by swiping their student ID at the entrance.

Otago is now the second campus, after Auckland, to have a dedicated space for queer and questioning students, Michaela said. “We have a lot of safe spaces on campus, we have a women’s room, we have a parent’s room, and now we have a queer space.”

Michaela and other Exec members of OUSA painted a feature wall, made up of brightly coloured triangles, in the Queer Space. Michaela also created a painting to hang in the space, depicting the love triangle in Māori legend between Tūtānekai, his male lover Tiki, and his female lover Hinemoa. She said it was really “special” to be able to show that artwork.

A student attendee at the opening said they were impressed. “I thought it would be a bit shit, because I was expecting them to shove it in a corner,” they said. “But it’s not shit at all, it’s a lovely space, it has good vibes. They’ve really tried to make it into a space that people actually want to go.” The only critique they had was that the fridge, which is covered in stickers from The Office, was “quite hetty”.

“I’m interested to see what it’s used for, it might just be used to find dates,” they said.

Another student said it was “pretty cool” and “not cringe”. They would go there “especially if I couldn’t find a space in the library”, but said it would be good for queer people who wanted to make queer friends.

The queer space has been discussed by the OUSA Exec since 2018. The Welfare Officer in that year started trying to scout out appropriate locations for the space, but the location wasn’t confirmed until late last year due to Covid delays. Early this year there were further delays because of renovation requirements for the space.

The queer space has a number of rules, including “no metal in the microwave” and not removing furniture.