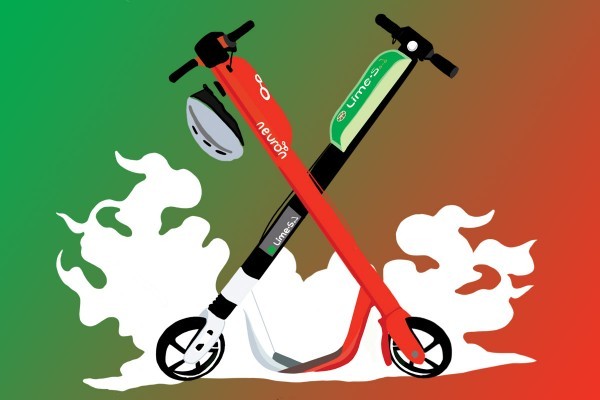 Lime Scooters Hoon Out of Dunedin

Orange is the new green

Citing “careful consideration” and the “weighing up [of] many factors”, Lime has decided to retreat from Dunedin. But anyone with half a brain knows that the real reason because we threw so many of their scooters in the Leith.

Lime is a self-proclaimed “global leader in micromobility”, which sounds like the kind of pick-up line a slime mould in a suit at an urbanism symposium would try. They have had a presence here since January 2019, which feels like an eternity.

For many, this represents the end of an era. Neuron’s arrival earlier in the year caused massive upheaval in the electric scooter scene as their price massively undercut Lime’s, forcing the latter to quickly drop their own rates. This may have been an eventual contributor to Lime’s decision to depart.

In a press release sent out in late June, Lime’s Public Affairs Director Lauren Mentjox announced Lime’s withdrawal by the end of the month and said that “we are really proud to have brought micromobility to Dunedin and serve so many local people as the city's leading scooter provider.”

According to the press release, over 90,000 people in Dunedin (around 69% of the population, nice) had taken a collective 750,000+ trips on Lime scooters. But no longer. No more hoons down George during Re-O, no more downright frightening kerbside injuries, and no more green chariots on every corner. Now, it is a sea of orange.

With all the power in Neuron’s orange hands, the wait begins to see if they will use their micromobility monopoly to jack prices up. Despite what fresher BCom students may believe, monopolies are not a good thing. FYI, the famously not-at-all-fun board game was actually designed to show how much monopolies suck.

But it may not be forever. Lime is a pretty non-commital kinda gal, and Mentjox noted that “the micromobility industry is constantly changing, so we may look to come back when the timing is right."

Chuck the remaining ones in the Leith while you still can.