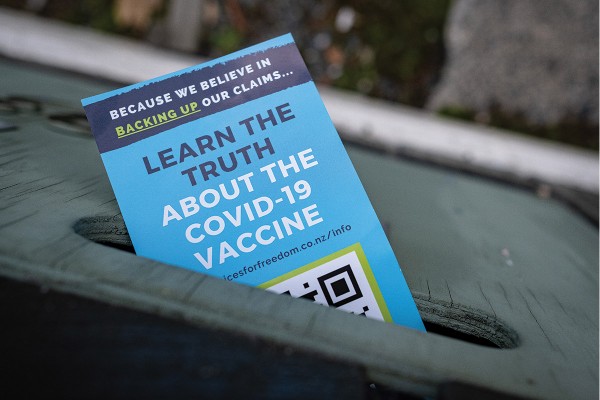 On Thursday 6 May, studentville was bombarded with flyers full of bullshit about the Covid vaccine. The flyers could be found on Castle Street, George Street, and Queen Street.

They were created by the anti-vax group “Voices for Freedom”, founded by three “passionate Kiwi mums” who want to “amplify the often-silenced voices who dare speak up.” Critic Te Arohi would like to apologise to their children for having such outspoken parents, assuming that those children weren't killed by an entirely preventable disease before the age of ten.

The group somehow managed to purchase, print, and distribute approximately two million flyers across the country at an estimated cost of $60,000. That’s a lot of money to decide not to donate to, say, a medical charity or a school board. Voices for Freedom definitely puts the children first.

In a letter this week, Marine Science Professor Abigail M Smith told Critic that “We need to expose this [flyer] for what it really is: harmful lies. The idea here is that the vaccine would cause more harm than not vaccinating – which is a lie.”

“Underlying this leaflet is a colonialist racist and wholly invalid argument that somehow New Zealand won’t get it because we are better,” she said. “We are somewhat guilty of this, in the southern South Island, thinking that we somehow, magically, won’t get Covid like they do up north. We couldn’t be more wrong.”

The publishers of this flyer are far from academic. Like the man behind our earthquake conspiracy piece earlier this year, co-founder Claire Deeks is an ex-lawyer, a career path seemingly common amongst people who refuse to wear masks on public transport with a desire to hold everyone else up with their complaints. Claire was also third on the Advance NZ party list behind such respected academics as Jami-Lee Ross and Billy Te Kahika Jr, so you know you can trust what she shoves in your mailbox.

The flyers were fucking everywhere on Castle Street. They carpeted the broken glass, making it almost safe to walk across. One student told Critic Te Arohi he was surprised at the audacity of the group, saying “do they think we’re stupid?” while another said “some people wearing tinfoil hats got access to a trust fund and decided to go crazy with it.”

Voices for Freedom, the conspiracy hub, is not to be confused with Voices4Freedom, which is an anti-slavery campaign. The Advertising Standards Authority has received four complaints about the flyers.

Students in front-line medical positions continue to get the vaccine in spite of the very convincing claims made.