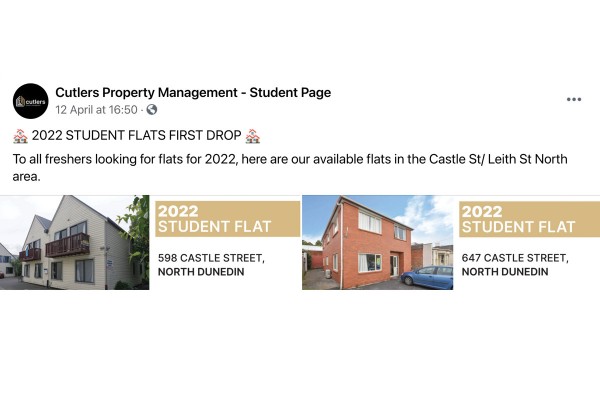 Worse than hot cross buns being sold in January

Cutlers is the first real estate company to release a flat list for Castle Street this year.

For many upcoming flatters, it’s the same shit, different year. A group of this year’s freshers, having declared themselves besties for life just a few weeks into the year, will sign a flat early to ‘avoid the crunch,’ and lock themselves in to what will inevitably become a blood feud fallout.

Dunedin’s favourite housing company has made it easier than ever to collect the tears of distraught freshers by providing early leases for fourteen flats on Castle, Leith and Dundas Streets (among others). Cutlers most recently came under Critic’s watchful eye when they graciously returned the famous Greasy Beaver sign to the flat after the previous landlord took it down.

That charitable act may have earned Cutlers some goodwill, but negative karma can be accrued quickly for facilitating the demise of fresher friend-groups. And sure, not every new flat will want to rip each other’s throats out by move-in day, but the fact that there is already pressure to sign flats means the rest of the freshers feel like they’re missing out and will hastily assemble flat groups to try and get a flat of their own.  It’s like an arms dealer starting a war, then selling weapons to all the combatants.

Critic asked students what they thought of Cutlers offering flats this early, and opinions were split into two camps. Freshers loved the idea, so that they can quickly try and claim the most storied flats, but older students were firmly against it. One told us that “I know it seems super cool to get a Castle St flat, but what you’re really signing up for is a shitty place, rubbish everywhere and not enough sleep.”

Cutlers did not respond to Critic’s request for comment.

If you feel like you’re being @’d, maybe consider critically the group of mates you’re about to sign on to a year of living with. Think about your personal standards of mould, cold, moist, and noise. Or, if you feel more “you can take the breatha out of Castle Street, but you can’t take Castle Street out of the breatha”, then go for it.