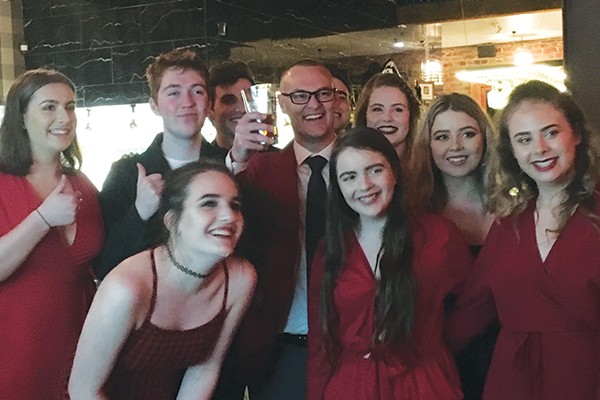 Joe Higham: What are your thoughts on how the election campaign went?

David Clark: It’s been a rollercoaster. When we began last November, we had a different leader and we had a plan we’d been working on for a couple of years, and it’s only a couple of months ago that we changed our leader and that really injected another level of energy into things, but the campaign locally has been huge. Previous campaigns have been well run with good leadership in them but this one is the biggest by a margin - it’s been huge. All up close to 1000 people involved. It’s getting harder to live in Dunedin North and not know someone who volunteers for the Labour Party and that means there are a whole lot of personal connections; the party is a grassroots movement and there is a movement that has grown over the last weeks and months that it’s hard to even imagine ever stopping. Things are just going to grow from here.

You and Clare Curran were extremely successful in Dunedin North and South respectively. What do you put that down to specifically?

We’ve run a campaign that has focused on regional neglect, and the ongoing delays to the hospital has been the epitome of that. I think that’s really resonated with people. It’s a frustration with the government, but partly because of the positive vision that Labour has laid out to address that issue. So we’ve said we won’t dilly-dally with public-private partnerships because they would add further delay, quite aside from the ideological argument against making private profit from public fund allocation. We also said that we would make sure it’s a centre city rebuild, and start it in our first term instead of in five years as National are currently projecting. All of those things show a focus on Dunedin and a priority for Dunedin that I think people have found easy to get behind.

There are a lot of positives to take from the campaign and one of those is Labour’s rise of 10 percent in the party vote from the 2014 election. Are you disappointed that the result (still provisional at this stage) wasn’t over 40 percent? Was that your aim?

Firstly, at a local level, we had a really good result last campaign. The National Party dropped votes on a booth by booth count. This campaign we grew by 16 percent in party vote in Dunedin North, which is extraordinary. I’m really, really pleased with that result.

In terms of the result throughout the country, of course I would have loved it if it was higher. That’s a truism. But, I guess the interesting thing is that more people have voted for a change of government than the status quo, and it will be interesting to see how that is reflected in the coalition negotiations, but any detailed comment on that issue I’ll leave to our leader, Jacinda.

What do you say to the argument that seeing as almost 1 in 2 voters voted for National, the coalition should involve them?

I think the results show the country wants to see change, and when the special votes are counted I think there’ll be a clearer indication of that, but it’s a negotiation and that’s MMP and we’ll have to live with what MMP delivers us.

Having served two full terms in parliament, you must have dealt with Winston Peters on many occasions…

Well I sat next to Winston during my first term in parliament on the Finance and Expenditure Committee, and thoroughly enjoyed working with him in that environment. He is well connected to the legal community and the case law that comes out of that community and also someone who understands politics incredibly well. When I was a first term MP, it was an absolute privilege to serve alongside him in that capacity. It was between him and Shane Jones actually!

What an interesting place to be sat... in light of what you learned about him over the last two parliamentary terms, what do you see him (Winston Peters) wanting to gain from the negotiations?

Credit to Critic for trying, but I’m going to leave any talk about the coalition negotiations to the leadership.

To me, Jacinda Ardern’s election night speech sounded as though it was a concession speech. What did you make it?

I thought it was extraordinarily good. I think that Jacinda speaks to Labour values incredibly well because they are at her core. That’s because she speaks from the heart, is reasoned and relatable and I felt incredibly proud on the night and I think we’re lucky as a country to have her in a resurgent Labour Party.

Can you speak to how well Jacinda has done since she assumed the leadership of the party?

I’ve known Jacinda since well before either of us were MPs, and I’ve always known she was an incredibly capable and competent person, and at the same time I have found it exhilarating to see her shine in a new role and to see her lead so competently right from the start. It’s taken the Labour Party a long time to find her as its leader, but I don’t think there’ll be any looking back now.