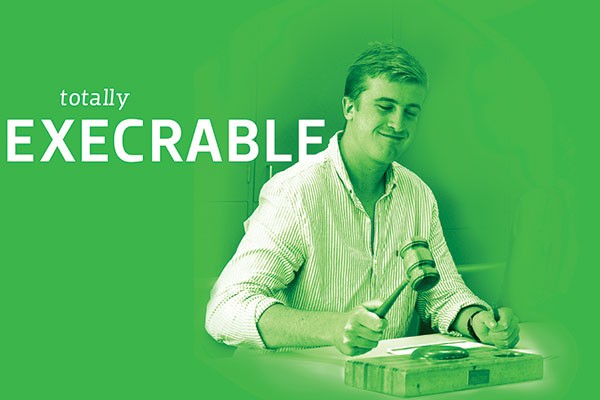 Keeping tabs on the Exec

The executive began by formally disaffiliated the Otago University Dive Club and proposed giving the entirety of their diving gear to the Otago University Spearfishing Club. Education Officer Bryn Jenkins reminded the group that doing that doing so could create difficulty in future if the Dive Club form again in the near future. Recreation Officer Caitlin Barlow-Groome then proposed that they get the equipment back if they form again before the end of the year.

Shortly after moving out of committee of the whole (a period where the executive can discuss issues confidentially), they voted on whether to extend the flu jab initiative (a scheme that the 2016 OUSA Executive provided to 200 people as a pilot last year) to between 2000-2500 students for this year. Refer to page 8 for more on that story.

The rest of the meeting was largely consumed by discussion and questions about each member’s first quarter report, which details what they have been working on and how successful that work has been. The vast majority were passed without issue, although some were criticised for formatting issues or brevity. Jenkins took issue with Welfare Officer Danielle Pope’s absence from Dunedin in the first two weeks of January saying “exec officers shouldn’t get paid for work in January that isn’t reported on.” He called for her first two weeks of honoraria payment to be docked 50 percent as a result. Admin VP William Guy leapt to her defence, telling Jenkins that executive members face a lot of responsibility whether they are in Dunedin or not. He also went on to say that OUSA offices aren’t even open until the 8th January anyway. Both Guy and President Hugh Baird said that she has “more than made up for it” since. The motion Jenkins proposed failed to be seconded by any other executive member, and therefore failed.

Jenkins then went on to ask whether the executive should have an honorarium working group to decide the best way to deal with honoraria payments because the system is flawed, before Baird said, “I think that’s a very stupid way of doing it”. The general opinion was that something needed to be done in order to stop the meetings descending into arguments about whether the association pays individual members or not. Having been on the executive last year, Jenkins said that “it was a hugely contentious issue last year,” before OUSA CEO Debbie Downs added, “and the year before”. The group agreed that they would get the terms of reference emailed to each of them and it would be discussed in an upcoming executive meeting.