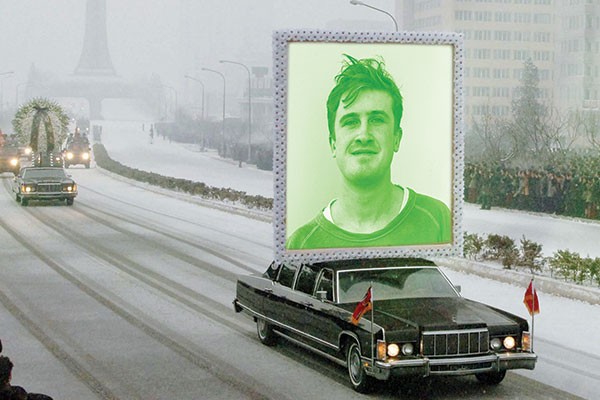 Hugh Baird wins OUSA Presidential Election by a landslide, as 4 out of 5 ‘Your Voice’ candidates are successful

The ‘Hugh Baird for President’ ticket has won both the Presidential and the Administrative Vice-President’s seats by a landslide, as fellow presidential candidates Lark Hare and Hashmat Lafraie struggled, coming in equally 14 percent behind Baird.

The ‘Hugh Baird for President’ ticket has won both the Presidential and the Administrative Vice-President’s seats by a landslide, as fellow presidential candidates Lark Hare and Hashmat Lafraie struggled, coming in equally 14 percent behind Baird.

William Guy, who secured his second term on the OUSA Executive, having served this year as Recreation Officer, ran unopposed for Admin VP, receiving 80 percent of the vote. It’s worth noting that 20 percent of the 4599 votes were for no confidence.

Similarly, the position of Finance Officer was won by Cody Kirby, who with no opposition, received 81 percent of the vote, with no confidence receiving the remaining 19 percent.

The Education Officer position, a tight run contest, was won by incumbent Welfare Officer Bryn Jenkins, who was one of four successful candidates from the ‘Your Voice’ ticket. David Wang, received 42 percent, 5 percentage points behind Bryn.

By far the closest run position was for Welfare Officer, with just 0.81 percent, or 37 votes separating successful candidate Danielle Pope, from Miriam Jenkins. Eileen Kennedy, who barely lost out on the position herself, came third with 28.67 percent, just 22 votes behind Jenkins.

In the Postgraduate Officer race, Lucy Northwood won by the largest margin of any contested seat for 2016’s election, running away with the seat by a margin of over 45 percent, as Adam Rowe managed just over 20 percent of the vote.

Colleges Officer was won by ‘Your Voice’ candidate, James Heath, who secured 54 percent of the 4538 votes, with Sina Ete almost 20 percent behind.

I am obviously pretty pleased to get across the line, both Hashmat and Lark ran great campaigns and I was a little shocked in the end. I am also very excited, it looks like a great team to work alongside throughout next year.

It was frustrating that Lark [Hare—unsuccessful presidential candidate] didn’t win, but we’ve got a really good team, there are some really good people there.

Looking forward to carrying on a lot of the stuff I started this year and ensuring that a lot of the good work this year’s executive have done is continued. One of the things we struggled with this year was the continuity from last year and I think having myself and Will there will enable that to happen.

Look, it’s the nature of the campaign that you are up against each other all week, and it’s very hard to judge based on this one week how things are going to work next year. I have full faith that everyone will get around a table, have a chat, yes there are differences, but it’s our job to rise above that.

I’m actually pretty pumped to be honest. I think it’s going to be a brilliant year, not just for OUSA but for all of the colleges as well, I’m very excited.

There are some exciting policies I can’t wait to get on with, like a minimum standards in regards to RA training for mental and sexual health, I think that’s particularly important.

I am just incredibly excited. It was so incredibly close in Welfare and I think MIriam would have been a great candidate as well, but I’m just so glad at how it turned out in the end.

I feel slightly gutted that Lark [Hare] didn’t get president as well but I think that the executive we have going forward will be great anyway.

Just being able to work and collaborate with people, and have a much broader reach than the work I’ve done with ATOM (Science Students Association).

I think we ran a really, really good positive campaign, and I think that was what was important. I think if you compare it with some of the other campaigns that were run they were run incredibly negatively, and for that, I’m incredibly proud of the campaign we ran.

Overall, we got an 80 percent success rate. We won four out of the five positions we were running for, so in that regard, awesome.Danielle, Bryn, Max and James are just great people, and I know they will be great in their positions; it’s a shame I won’t be joining them.

Six hours after the results were announced, Lark posted on the ‘Hugh Baird for OUSA President’ complaining at how: “disappointed in the attack your 'team' unleashed on myself, my team and our ideas. I felt it was uncalled for and unnecessary in your campaign.”

“I have seen a really 'ugly' side to you and your team. I am delighted the rest of my team was elected and I am sure you will find working with them enjoyable as they are wonderful! All the very best and congratulations again.”

"Congratulations to all of the candidates who put themselves forward, and campaigned during the election process.  A turnout of 4600 students is a testament to campaigns of all candidates.  It’s particularly exciting to see the turnout in the OUSA elections trend upwards, after a steady decline in recent years.

Next year is a general election year, so there is a real opportunity for the incoming Executive to put the issues of facing students front and centre of the political debate.”