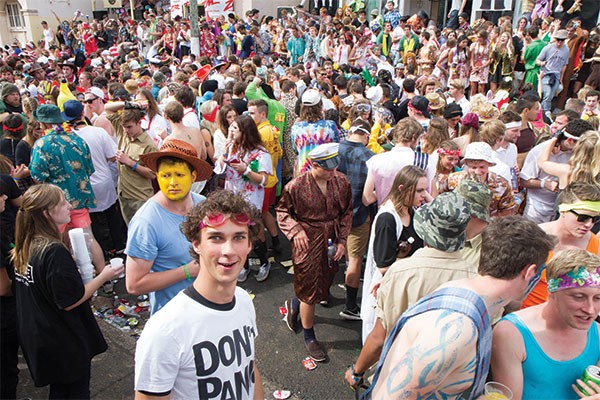 The annual Hyde Street Keg Party has become infamous, not just in Dunedin, but much, much further afield as well. The demand for tickets this year has been unprecedented. After the servers crashed, the first batch of 1,000 tickets were sold out in 45 seconds, and OUSA were experiencing over 11,000 page loads per second during the 12.30pm backup sale period. While a huge amount of students will be rueing their luck after missing out on the biggest party of the year, mainstream media and the community of Dunedin and even further afield will be waiting to leap on the many incidents Hyde Street inevitably provides.

The event has come a long way over the last five years, yet alone since it began. Although a consensus hasn’t been reached on the date the party actually began, OUSA President, Laura Harris, said, “rumour has it, it started the same year as Otago University opened [1869]”, although this claim seems to be highly unlikely. Nevertheless, the rules and regulations synonymous with the modern day party were not always so stringent, although only a handful of current students can attest to having attended the pre-regulated Hyde Street Keg Party.

A major turning point in Hyde Street history was the 2012 event, where 80 people were hospitalized and ten arrests were made (although, unlike the ODT, Critic must mention that only one of those arrested was actually a student). The event was largely marred by a roof collapse, which gained nationwide attention, and occurred while someone was drinking on the roof of a flat. Otago Vice-Chancellor, Harlene Hayne attended the keg party that year, and later said she witnessed “carnage literally spreading from Hyde Street to the Botanical Gardens.” It was the backlash of this event that caused the party to become regulated, a move that some say was the death of Scarfie culture as we know it. Hayne also said following the event that, “as vice chancellor, I can make more rules and hand out more punishments in an attempt to stem the tide, but I would prefer to work with students to find a more workable solution. Indeed, OUSA President at the time, Logan Edgar, stated, “all we need is for someone to step up and have the balls to take responsibility. OUSA’s in a position to do that.” And OUSA did just that.

All eyes shifted to OUSA as first-time organisers of the party come 2013. Students were largely keen to see as few changes as possible and police, the University, and the Dunedin community in general were looking for a safer, organised and seamless event that would be enjoyed but not exploited by those attending. Harlene Hayne stated she was confident that “OUSA’s involvement will go a long way to maximizing the fun while at the same time minimizing the harm.” Moreover, the Proctor told Critic that OUSA “can only assist” and pointed out that it is more effective for students to be corralled by OUSA than by a line of police. Overall, it proved a “big success,” according to former Admin Vice President, Ryan Edgar, who noted, “the rain helped control it.” Twenty-one people were arrested in 2013’s party.

OUSA experienced what it was like to organise a party for 3,500 people and presumably, with this experience, the event could only become a better-organised one. In 2014, the 1118 general admission tickets sold in just two minutes (slow in comparison to the 2016 record-breaking year), showing the popularity of the event hadn’t waned at all since OUSA got involved. All in all, twenty people were taken to the emergency department, nine of those due to of alcohol overconsumption. Figures provided by OUSA show there were one third fewer arrests than 2013 and 45% fewer casualties treated by St Johns Ambulance service.

In 2015, there were just twelve arrests, fifty treated for injuries, with six sent to hospital and one ambulance out of action for a week after it was shoulder charged by a drunk partygoer.

Mayor Dave Cull was quoted in the ODT before the event revealing “the public resource that goes into that one day is about $125,000”, while the discourse from politicians continued, with David Benson-Pope saying “I am embarrassed as a Dunedin resident to have a slum like that in the middle of town” although he also mentioned, however, “I’m not against people having a good time, and if they want to do it in the street that is fine, provided it’s safe.”

The figure of $125,000 is a ballpark amount, and was given by a Southland District Health Board member during a tertiary sector group meeting, and therefore cannot be verified. Paul Hunt, speaking while he was OUSA President last year, said, “The cost to the taxpayer would be the cost of having the police at Hyde Street, but it’s not uncommon for the police to be at events. Other taxpayer costs would be Dunedin Hospital and healthcare facilities.”  Hunt noted last year that OUSA spent $22,000 on the 2015 event, with 45% of that on security, 27% on traffic management, infrastructure and fencing, 30% on the St. John Ambulance Service, and 8% on food.

Ideas have been proposed to control the economic cost to the taxpayer, with Michael Woodhouse recommending “adding a $35 tariff to the ticket price to cover the price of emergency services,” before adding, “can we have events like this without booze-filled disorder and negative health effects?” Condescendingly ending his column, “over to you [students].” Dunedin North MP David Clark said a solution that could work is that “those costs be sheeted back to those who generate them, and often that sorts out problems.” Benson-Pope agreed, suggesting, “The people who should be paying for [the clean up] are the people who are making the mess, not ratepayers.”