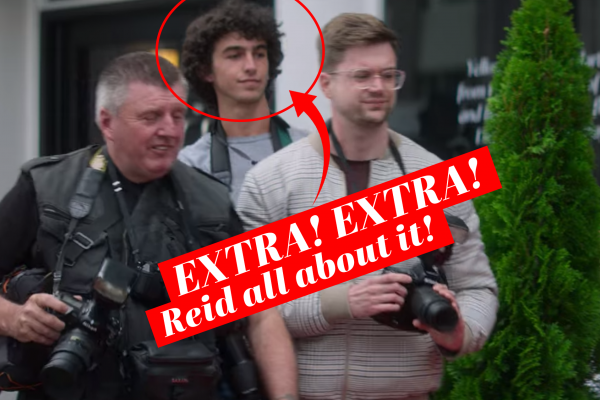 At least one student has made it into the cast (but not the credits) of The Royal Treatment, the Netflix movie filmed in Dunedin last year.

It was dark in the room where Critic met with Reid. He sat at a laptop, watching and re-watching an eight second clip of The Royal Treatment. In the foreground, he’s briefly visible as paparazzi. He has spent the last two weeks watching and re-watching this clip. His flatmates are worried, but Reid doesn’t share their concern. “They don’t get it, they’re not actors”, he said.

The Royal Treatment, which was met with wonderfully scathing reviews, was set in New York City. The producers decided that Dunedin would be a suitable replacement for the Big Apple, but Critic wasn’t so sure about that. Neither were many students, some of whom took it upon themselves to get into the background of as many shots as possible. Reid was one of those students.

“I wasn’t just in the background - I was a bona fide extra”, said Reid. He got selected through a talent agency, building on his illustrious career of grade school acting. “It’s been a bit of a drought after my last role - after I played Oz. After that, I fell onto the drink, and really hit rock bottom. So it’s good to get back on my feet. The Royal Treatment provided me with that opportunity, and I’m really thankful.”

Reid is in the movie for about eight seconds. His role starts at 7:46, so you don’t need to sit through very much of this vapid excuse for a rom-com in order to see him. He’s paparazzi, catching Laura Marano (Ally from Austin & Ally) on her way down the block. Reid has the big hair. You’ll see him stick his hand out to point to her. “That was total improv from me, by the way. I just thought that the point felt right so I winged it. I pointed at Ally, but I think I pointed at a few peoples hearts, too. I think I might get my own Netflix show out of it.”

Reid said that the whole thing was super fun, even if the movie itself was “a bit awful”. He made at least 200 bucks, enough to pay off his gambling debts and “buy piss”. He said “it was great talking to the people there, the big shots. About eight of them flew in from the US, not sure how, but it was still cool to see how their whole process works.”

You can watch The Royal Treatment on Netflix. Or not. “I already got paid”, said Reid. “I don’t need any royalties.”