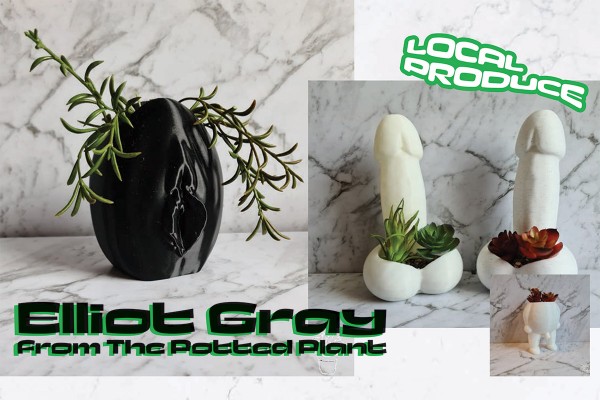 From the Potted Plant

Elliot Gray is an ex-Otago student who creates planters in the shape of various genitalia as a side hustle. His business has been a huge success, with a penis-themed post reaching millions on Facebook.

Elliot 3D prints the pots. His interest in 3D printing started while he was studying IT at Otago. He says: “I was always interested in 3D printing since it first came to light. Funnily enough, I spent my course related costs on a machine when I was studying.” He gets a mate to design the pots for him. “I have a really good designer who I send my ideas to and he comes up with the designs then sends me through the files to print. I’m terrible at design, I’m more mechanically minded,” he says.

Elliot started out printing more tame designs, he said, but clearly things have gone in a slightly different direction. “Originally I started with a variety of planters that weren't so erotic.  I have one that looks like he pees every time it's watered. That planter got a lot of attention and everyone seemed to love it.” One thing led to another and he began to get more creative with the designs, he said. “I took a stab in the dark and had The Dong planter [shaped like, you guessed it, a penis] designed. That planter was the most popular planter out of all my inventory. From that I went down the path of other options for penis planters.”

He has branched out into more feminine designs, he says. “I also had a range of naked woman body planters and booty planters that were quite popular, so I started getting the impression people liked different styles of planters — especially the more sexually orientated ones.”

Social media has been a big part of Elliot’s success. “It wasn't until recently that The Dong planter blew up on Facebook and went viral, the post has reached around 2.6 million people so far and is still going up.” Paying attention to comments on his posts has allowed Elliot to get some insights into his customer base. He was inspired to create The Dong planter after “seeing how well the planters did, and the funny reactions and comments.”

The pots themselves take some time to create. “They are very slow to make, each one takes around nine hours each. I can fit two on a machine at a time and I have seven machines. Once they are complete, there is a little bit of post processing like cleaning up the model and removing unwanted bits of plastic.” The plastic is environmentally friendly, he said. “They are made from PLA which is a recyclable, biodegradable and compostable plastic.”

Future expansions to his collection are likely, Elliot says. “I have a lot more ideas for future pots, more female style pots as there are a lot of male ones on my website. I'm always looking for new ideas for planters and am open to suggestions. I've had requests for wholesale orders of the planters which I'm organizing.” Elliot enjoys the work, he says. “It's definitely a passion of mine making items to sell. It’s a business and a hobby. I love it.”

Check out Elliot’s range at thepottedplant.co.nz.