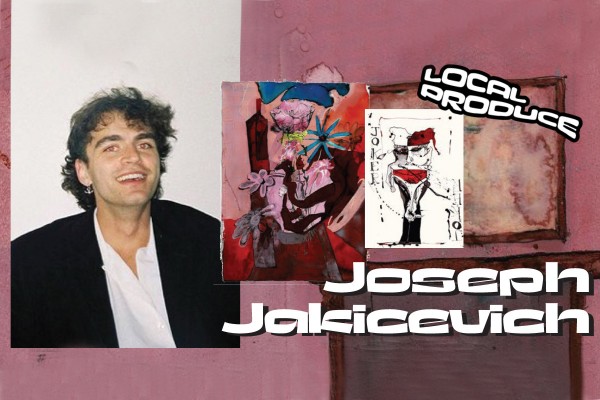 Joseph Jakicevich is an artist currently based in Wellington who popped down to Ōtepoti at the start of the year. His unique artwork often features eye-catching distorted subjects. Critic checked in with him to see what it was like collaborating with artists from all over Aotearoa.

Joseph recently worked on an album cover for Dunedin artist Tom Sharp and has recently designed labelling for Sunshine Brewery in Gisbourne. “I've worked with a few cool artists from around New Zealand, and for a brewery. Not a long list of affiliates, I am new to the professional scene but definitely wanting to make that grow,” he says.

Joseph has been creating art for a while, and is now taking his creations to the next level. “I've drawn (with whatever medium) for ever and ever. I have always had an affinity with pen and ink, but in terms of professionalism and the realisation that this is what I want to do, it has been around three or four years,” he says.

He keeps it simple with his materials. Ink is always the main ingredient “Ah, Just a fountain pen, Sumi Ink. I like Colorex water based Inks (they're also the cheaper version), but Winsor & Newton are pretty good.” But not all inks are created equal, “I try to avoid Sennelier inks as they're all slimy and I don't like that.”

The amount of time he puts into his work can vary, he said, with each work being different. “It depends on the size of the drawing, a drawing can take up to three days or it can be done in four hours.” He doesn’t have a set process either. “It's weird. I don't do the same thing every time. I like to not care too much and skip the whole 'pencil step', meaning I make a lot of mistakes and throw stuff out. It varies.”

Joseph mainly works at home. “I’m working in my flat at the moment, meaning I have to be a bit more reserved. I can't get as messy as I want to.” He doesn’t really have a set work space. “It's more just wherever, although with the messy nature of my work I'd like to have a set space, somewhere that can double as a studio and as an apartment, and just go crazy in there.”

Inspiration for his artwork comes from a variety of sources, noting that other artists are also a source of inspiration for him. “In terms of style my most favourite artists and illustrators are Shaun Tan, Istvan Banyai, and Ralph Steadman. So when I'm stuck I tend to refer to them, which probably directs my style towards them.” But experience is also a big factor he said “But again I don't know, I find inspiration mostly from other people, or humanity as a species. We are weird. So there's always something that's gonna spark some sort of ideas.”

Joseph isn’t entirely sure about his motive, beyond just a love of his work. “It's just like that one thing that I really like. I just want to do it more and more. At the very moment I've completed one drawing, I want to do it again but better. That's the drive. Fortunately we live in a world where other people can like your stuff too! I guess that helps.”

He likes that his work exposes people to something different. “I also think it's good for people to have an access point for darker/provocative visuals. To constantly be able to allow people to perceive the world in a different manner for even just a moment, is a good thing, even if that visual wasn't 'good.' I think it allows for a change of perspective. A new way of thinking.”