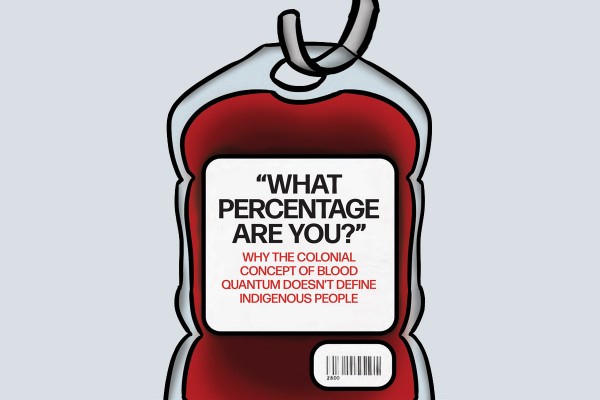 “What percentage are you?”

People sometimes ask weird questions, that’s how life is. However, for many Māori here in Aotearoa, or any indigenous person, a common question we often receive is “so what percentage are you?”

This question is generally asked when people find out about your indigenous heritage, or the debate surrounding equity and entry pathways comes up, or if you don’t ‘look’ how you supposedly should. Sometimes it’s a purely innocent question people ask out of curiosity or interest. Sometimes it’s invasive, insensitive, nasty and is asked out of spite. As if one’s identity or eligibility should be measured by a fraction or number.

On the occasions I’ve been asked the question, it takes a moment to process, and my internal dialogue is often something along these lines: “Do I gently explain that blood quantums are a made up colonial concept? Or do I rip their head off and tell them to fuck off? Or, maybe I am just the percentage they claim I am?” The problem is, I’m tired of politely explaining why my identity and existence isn’t a number. But if I get offended and overreact, I’ll be told to “chill out” because it was just a question.

My whakapapa, language and culture has been questioned and scrutinised for generations, and I should not belittle myself or my tīpuna just because Jeremy from the North Shore who sits beside me in LAWS101 can’t wrap his head around the fact people aren’t numbers. Despite this, I usually politely explain that asking an indigenous person what ‘percentage’ they are is harmful, hurtful and invasive. Here is why.

The notion that an indigenous person’s identity, existence, value, or ‘indigeneity’ is quantified or validated by a number is a concept that was introduced by, you guessed it, colonisation. Plot twist! After decades of colonisation, interracial marriage and the alienation of indigenous peoples from their land, settler-European governments began to implement “blood quantum laws”. The first can be linked to the Indian Blood Laws found in the United States, with similar laws also implemented in Canada. The entire basis for these laws was to establish defined racial population groups, because colonisation wanted to bring along its besties: segregation and alienation. Someone could only be considered indigenous if their blood quantum was defined as the fraction of their entire ancestral lineage. This meant you had to prove you were ‘¼’ or ‘⅛’ indigenous to be considered indigenous in the eyes of colonial law.

But most indigenous peoples or tribes don’t include blood quantum as something which determines if a person is or isn’t indigenous. Because, newsflash, reductionist approaches to identity are not used in indigenous cultures.

I’m not saying that anyone can go claim indigenous heritage because they feel like it. In the context of Aotearoa, getting recognition for your Māori lineage is generally done through providing a variety of paperwork and proof to the iwi which you are affiliated to. This can be the likes of historical records, whakapapa or family trees, birth certificates or other legal documents.

As an example, my father and his brother, and my grandfather, and so on and so forth are all Māori, specifically Ngāi Tahu. When I was born, my family still had to present a variety of documentation and fill out an application form for me to be registered as Ngāi Tahu. This is what I’m saying. Indigenous communities want to see your family history, your family tree, your stories, and your photographs in order to show your connection. They don’t ask for a percentage or a meaningless number.

If you whakapapa Māori, you are Māori. If you’re indigenous, you’re indigenous. End of story. You are not the number or the fraction oppressive colonial laws and mindsets make you out to be. People are the accumulation of their families, of their ancestors, of their histories, of their cultures, and the stories which they tell. They are not a fraction or a number on a made up piece of paper validated by a made up law which a bunch of white guys created on land that isn’t even theirs.

Don’t ask “what percentage are you?” It’s invasive, it’s hurtful, and it reminds us of the very thing we are attempting to rid ourselves of: the effects of colonisation. To any indigenous person who has been asked this question or subject to this scrutiny, I’m sorry. To any indigenous person who doesn’t know their family history, or can’t speak their language fluently, or is limited on their knowledge of their ancestors, it’s not your fault. You are no less indigenous. May you keep searching for the information you need, and know your tīpuna are watching you, and they are with you.

Another indigenous baddie gives her take

I’ll entertain you, though. If you were to split my blood into percentages, you’d see me as about 37.5% Fijian, 25% English, 25% Italian, and 12.5% Chinese. What information does that actually give you? Sure, there’s the argument that if you don’t split your ethnicity up like this, you risk losing connections with all the different ethnicities you whakapapa to. I’d argue that it simply does not matter ‘how much’ you are, it just matters that you are, and that you have a genuine appreciation for the people and places who came before you; the amalgamation of which ended up in the birth and life of you.

To keep things simple, I, probably like many other multiethnic baddies, have well rehearsed my response to questions about where I’m from or what my ethnicity is. When I say “I’m Fijian European” almost always, the immediate response is something to the sentiment of “oh, so you’re half half. Cool!” Half half? Tell me, then, how am I supposed to practically split myself up for you into these percentages you categorise me as? When I’m born and when I die, is my body split up according to the percentages you define me by? Absolutely not. We are born and die whole, full, an incorporation of all the things our parents have come from. Another common response is “you’re mixed”, which is just kind of plain rude. Things are mixed — ice cream, nuts, not people. I’m not a commodity to be mixed or split up to make it easier for you to consume.

Not to be all woe is me, wah wah, pity me, but getting asked these kinds of questions is fucking hard sometimes. It’s hard enough going through identity crises as a typical part of life, and this is made more difficult when the questions you voice inside your head are questions that are outwardly hurled at you too. It hurts even more when it's from the mouths of those you consider ‘your people’. There’s an accompanying feeling of not being enough of anything to fit into any particular group of people too. The overused trope of being too white for the brown kids and too brown for the white kids really rings true for some — no matter how white or brown passing you might appear.