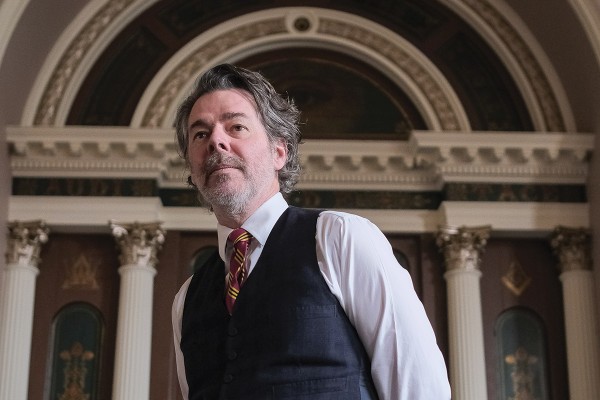 The Guy with the Suit and the Synagogue: Peter Grace

Peter Grace is known to most as a lecturer of New Zealand foreign policy at the Department of Politics, or the mysterious 100-level International politics tutor. Grace is best known for his kind and soft spoken demeanor, his dedication to his students, and a penchant for Savile Rowe suits.

Many only knew Peter on a surface level, with rumours about his life before academia often swirling around the department. Until now.

It was a gloomy Tuesday morning. Sitting in town stood a towering and intimidating, yet glorious building: Dunedin’s deconsecrated Jewish Synagogue and headquarters of the elusive Freemasons. From the towering entrance hall emerged a smiling and eager Peter Grace, who welcomed us into his home.

We walked down the wooden hallway, footsteps echoing, and Peter began to give us a tour. He showed us the former ballroom, his pool table, a bedroom which used to be the prayer hall, complete with an unnerving eye looking over the room. An altar has been converted into a closet.

Eventually we made it to the living room and he asked exactly why we were interviewing him. The answer? Because he’s a middle aged man who wears Savile Rowe suits and lives in a deconsecrated Jewish synagogue. He’s straight out of a Bond film. But more seriously, our lecturers are interesting people who have lived many different lives prior to University.

Peter wasn’t always an academic. “I didn’t go to university when I was young. I got thrown out of school, my headmaster told me ‘I think it’s time you move on Peter.’ I was on every single committee but I did no fucking work at all. I had worn the teachers out,” he said. After leaving school, Peter took the first job he could, as an advertising cadet for the New Zealand Herald.

“It was the lowest of the low, you would grab newspapers and punch a hole in them,” he said. “But there was something romantic about working at the Herald in the days of hot type before computers, it was exciting and industrial. The place was like a rabbit warren with corridors that led nowhere.”

After working at the Herald he was offered a job at an advertising agency. “I decided I really wanted to be a copywriter. Advertising was worth it [back then], Möet was flowing as you were working, you worked hard and played hard. It was very rock ‘n roll in those days.”

After gaining more experience in the industry, Peter started his own advertising agency. “We were bored shitless with it after ten years,” he said. “You get to the point where you say no one will hire me, I only had one track.”

After being diagnosed with a rare form of cancer, Peter began to think more seriously about his life, his happiness, and his achievements. “It was not a big deal. It was a rare cancer, one in a million people get it. It’s a common cancer among dogs. The surgeon was quite excited about it. Once they cut that out, they said if it doesn’t come back in a year, you’ll be fine. My wife said ‘what the hell do you want to do with the rest of your life?’”

That ignited Peter’s passion for learning. “I said, ‘I want to go to university,’ and I picked Otago. I had been thinking about it for a long time, like ten years. When you are starved for intellectual content you pick up books, and you think you understand them but you don’t. So I came to Otago and did a BA. The plan was to leave and do something else,” he said.

After finishing his BA, Peter completed his Masters in Politics, looking at Russian foreign policy. Although he had originally been recommended by a friend that he should only do one paper a semester, Professor Janine Hayward laughed and said he would find four “manageable”. He said, “back then I wanted to do my PhD, and now I’m hoping to submit it in December.”

“I don’t have a problem with things being old, look at the house. My watch is a 50 year old Rolex, it’s the same model as Sir Edmund Hillary’s was. I like second hand things, my car is second hand.” Peter owns a 1970s Bristol 411, a model so rare there are only two in New Zealand.

In academia, he specialises in foreign affairs. Using the Taliban takeover of Afghanistan as an example, Peter said that “people forget the lessons of 20 years ago. They forget how bad the Taliban were in terms of their treatment of women and the desecration of cultural sites. We knew that 20 years ago. The world is an evil place, we can’t keep trying to stamp out evil because it reappears in other places.”

Instead, Peter turns to minor parties. “My first vote was for the Values Party which was the old Greens. I was interested in Values at 18, I wanted to fight for them. I spent about ten years in the wilderness where I didn’t vote at all because I was nightclubbing and going to the pub. When I came back to Auckland, I voted for ACT, which was a hideous mistake,” he chuckled. One day, Peter said he was approached by a friend who recommended he read Paul Temme’s book titled ‘The Waitangi Tribunal: the conscience of the nation’. “It was a revelation. I started voting for the Māori Party, and I have ever since. Māori have to have stronger representation. Even if you don’t agree with what they’re saying or their policies, I still believe the Māori Party needs support.”

When asked about his initial response to the book, Peter said: “I was willing to give my house away after I read the book. This country is so fucked, the only way to fix it is to start from scratch and give Māori everything they deserve. I’m a bit of a champagne socialist, but I still think we’ve got a long way to go to fix that.”

When asked about the top three moments of his life, Peter said it had to be his time as a journalist in New York City, spending a week writing at Def Jam records. “In 1987 I went to New York, writing for Rip It Up magazine. I was standing on 7th Avenue, we had just come out of a deli and there were three limos lined up. Run DMC was getting into one, I asked for an interview and Run said ‘talk to my publicist.’” Naturally, Peter asked.

Before he knew it, he was whisked away and thrown into the offices of Def Jam records. He recalled that, “everyone would be yelling at each other at the top of their voices” in the offices. His time at Def Jam also included watching Texas Chainsaw Massacre with the Bestie Boys before they got big, and partying with comedy legend Eddie Murphy. But it didn’t stop there. Upon returning to Auckland from his whirlwind time in New York City, Peter said he got “full of himself.” “So I said to my mate, we should have interviewed Andy Warhol. I got him on the phone, and he died two weeks later. I got the last interview on the planet. It was charming, he was fun.”

When asked about his advice to young people trying to find their way, he says that money and power aren’t everything. Instead, life is much more about making your own decisions, rich experiences and telling stories. “I didn’t navigate my life, I stumbled. I want students to  be problem solvers, not follow someone else’s instructions. I can’t think of anything more disheartening than following someone else’s dumb descions.”

He recalls when he first began in advertising, “there was this guy [in the office] who would get up and charm you for an hour with the things he’d done, and I thought: ‘I want to be like that guy,’” he said. “It’s not about money and power, it’s about terrific experiences and telling stories.”