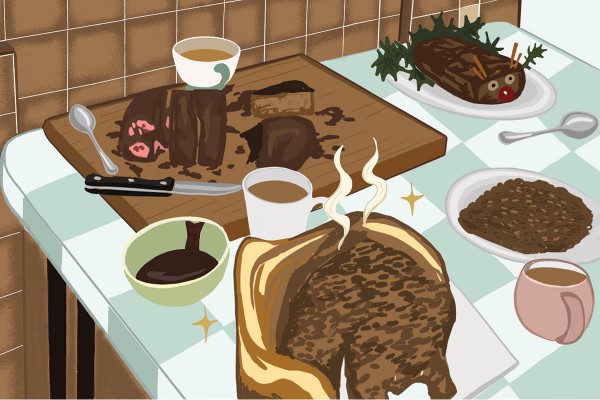 Much like Regina George’s hair, Otago University is full of secrets. Tucked away in the streets of North Dunedin, there exist all kinds of weird and wonderful traditions. One of them is the Meatloaf Party. Critic Te Arohi attended the 30th anniversary of the event, which means that meatloaf has endured longer than most of our readers' parents' marriages.

The Meatloaf Party is exactly what it sounds like. It’s a party where you taste and judge an ungodly amount of meatloaf. With no prior knowledge of this tradition, Critic received a cryptic invite just a week before the event. There was almost no information or detail given. We were just told that this was a very serious and well-respected tradition. We received an address, a time, and a dress code.

It was 8pm on a Wednesday. The address led us to an ancient, towering villa on Queen Street, at the top of a twisty and treacherous set of stairs. There was no lighting on the slippery path because students are broke and reckless. The mysterious invitation, paired with the dark walk, made this event feel like the beginning of a horror movie. We were glad to be a company of three.

We wondered whether this party was legit, or if we had been pranked by some freshers looking to kidnap us and turn us into meatloaf ourselves. Fox took reassurance in the fact that he could probably outrun his two companions, if push came to shove. But he didn’t say that out loud.

The anxiety didn’t last long. Once up stairs, party host Tori, who appeared to be very normal, welcomed us in. The suspense and fear of being murdered disappeared. Tori handed us each a piece of paper which we were to put in the cup “beside our favourite meatloaf”. Tori explained that this was a “very serious party”.

We were guided through to the living room, and there it was: the meatloaves. They came in all shapes and sizes. There was a handsome, pie-crusted meatloaf, a raw meatloaf shaped and styled as Rudolph the Red-Nosed Reindeer, and a sorry excuse for a meatloaf that was literally just a pile of mince. Above the tasting table was a hastily painted flat sign that read: “The Meatloaf”. Apparently this is the name of the flat, which made the entire experience a bit more understandable.

Fox Meyer and Keegan both claimed to be vegetarians once they saw the meatloaf, leaving Culture Editor Annabelle Vaughan as the only taster. This can only be described as a stitch up. However, the hosts anticipated such dietary requirements, and entries included a veggie loaf and a desert loaf for the non-meat eaters in attendance.

The living room was filled with girls in ball dresses and guys in suits. There was jazz music playing in the background, which was apparently meant to make people feel “just really fucking odd”. The vibes were incredibly culty, and most people were already reasonably hammered before the tasting even began. It later came to Critic’s attention that it was hosted and attended by former residents of Knox College, which explained the crowd’s culty vibes and low alcohol tolerance. To solidify this further, the hosts also informed Critic the flat was a former brothel. “Who knows what used to happen here, we don’t engage with that history, but that’s what the landlord told us,” said Tori. Their basement, for the record, is absolutely haunted.

As people continued to arrive, Tori explained that they didn’t know about this wacky tradition until they spoke to the former tenants. “When we came and visited the flat last year, we were talking to the flatmates and they were like ‘we do this tradition but we didn’t do it this year because of Covid,’” she said. “Then a flatmate from 2014 came back to see the flat and was like, ‘are you guys doing the meatloaf thing?’ and we were like ‘oh fuck, it must be real.’” Charlotte, the other host, explained that the party is “meant to be small with ten people, but we’ve decided to up it by 40 to 50. There’s tradition, then there’s making tradition fun,” she said.

As for the night ahead, Tori hoped that people would “take the taste rather than the appearance on board” as it's important to “not judge a book by its cover” and to “embrace the loaf.”

Once everyone arrived, the hosts called everyone to gather in the living room around the loaf table. Tori announced that everyone had to be quiet, as there was a special guest arriving. Mustachioed Jono arrived, and a hush fell over the crowd. He relayed tales of meatloafs long ago, and shared how he and The Boys would cook up a cheap, fast, healthy feed of meatloaf, and the beginnings of the tradition, when the flatmates would compete with each other to see who could cook the best loaf. He provided insights (Mi Goreng noodles are apparently a good addition to meatloaf), cracked jokes, and regaled the crowd with tales of the Dunedin of yore.

The meatloafs were tasted, votes were cast, and controversy ensued. Jono awarded first place to a meatloaf styled as bangers and mash, and quickly drew criticism from the unruly crowd. He amended this count, opting instead for “democracy by applause”, and asked for cheers to be made for the crowd’s favorite loaf. Ultimately, the pie-styled loaf took home the proverbial cake, and netted its maker a fifth of vodka.

As Critic wrapped up in the spacious, probably-haunted manor, a keg was hauled into the sitting room. Cheers were given, speeches made, selfies taken. The Rudolf loaf, missing one eye and all possible dignity, slowly collapsed under its own weight and formed a sort of fleshy puddle on the plate.

Somewhere in Dunedin, far away from the party, a bag of mince is being packed. It sets its sights on the high-rises of Queens Street, to the most lurid and luxurious former brothel that the town has to offer. It dreams fondly, and exclusively, of the day that it too may become meatloaf.